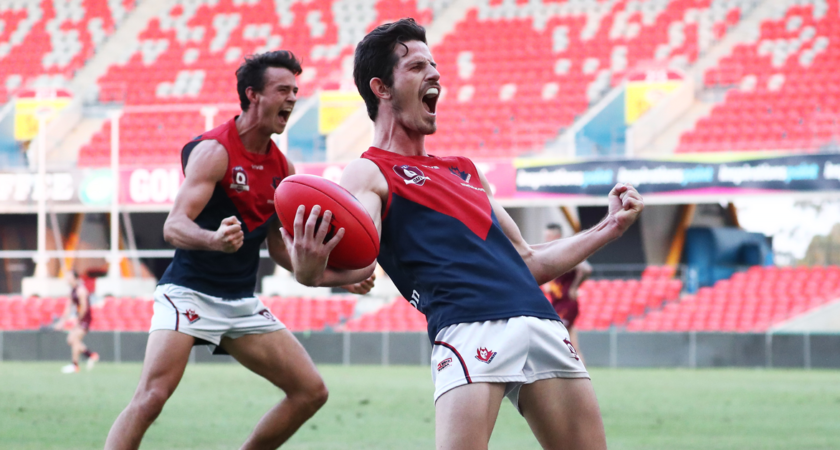 Surfers Paradise have broken a 21-year premiership drought to rewrite the history books with a two-point win in a QAFL Grand Final classic against Palm Beach Currumbin.

The Demons have been forced to wait since 1998 to once again taste premiership success but that streak has now been broken.

The Demons and Lions went toe to toe throughout the entire four quarters but a Dan Green goal early in the final term was enough to put the Demons ahead in the 9.7 (61) to 9.9 (63) win at Metricon Stadium.

It was a fitting fairy-tale end for Green in the game, who is hanging up the boots for the last time in the win.

Following the game, an emotion Green said the win was the perfect send off for the Demons veteran.

“There’s so much emotion. I’m just so speechless, I’m so proud of these boys,” Green told aflq.com.au.

“It’s just a dream come true. It’s a fairy tale. To do it with my brother in my last game, it’s magic.

“I’m just so ecstatic for the boys and the performance that we produced today.”

Little could separate the two sides throughout the entire game’s progression and it wasn’t until Green’s final term major as well as behinds from Renee LeFeuvre and Dale Eames was enough to edge them ahead and secure the win.

Early in the game, and in their first Grand Final in over a decade, nerves seemingly didn’t waiver the Demons who emerged as the more settled team early in the game.

The Demons midfielders worked hard, creating the opening handful of clearances but had little to show for it. Instead, it was the Lions who drew first blood through Jack Anthony who converted his opportunity after taking a strong mark inside 50.

Surfers Paradise soon got reward for their effort and their creative work in the midfield soon paid dividends on the scoreboard.

Following Anthony’s major, the Demons kicked the next five of the match including an emotional shot from long time forward veteran Green in his final game for the Demons.

Surfers Paradise’s lead was a stunning start to the game but it didn’t last overly long as Josh Wooley earned some footing back for the Lions in the shadows of the first break.

Following quarter time, the Lions again pegged back the lead as their midfielders, led by Jason Burge on the inside and Jon Croad in the ruck, willed the ball forward.

Nic Crowley and Anthony both kicked quick goals in the second term while Daniel Van De Werken helped Surfers hold their lead with a steadying shot from 45m out.

The two sides then engaged in an entertaining and heated arm wrestle as defence soon became the theme.

Brody Haberfield continued his lock down role on Anthony commendably while for the Lions, their last line of defence helped stop several Surfers Paradise scoring opportunities with clutch marks deep in defence.

The even standings in the game soon became transposed on the scoreboard as Jesse Derrick slotted his first of the game after the siren to even things up at the main break.

Following half time though, it was the Lions who came out firing, booting two quick goals to etch a 12-point lead within the first three minutes of play.

But much like most of the game, neither side could will themselves ahead as the Lions and Demons traded goals throughout the term – the Demons scoring through Dale Eames and Hadyn Kiel to keep the two sides level once again at the final break.

Surfers Paradise were forced to repel countless Lions forward entries and each time, they remained solid as the pressure climbed in the opening minutes of the final term.

With the Demons’ defence solid, their forwards moved ahead and some creative play from Renee LeFeuvre allowed Dan Green to kick the final term’s first goal and edge the Demons ahead.

Jack Anthony soon kicked the Lions back and scored, again, were level.

But the will power and stingy defence of the Demons continued to stand tall and a string of behinds sealed the upset.