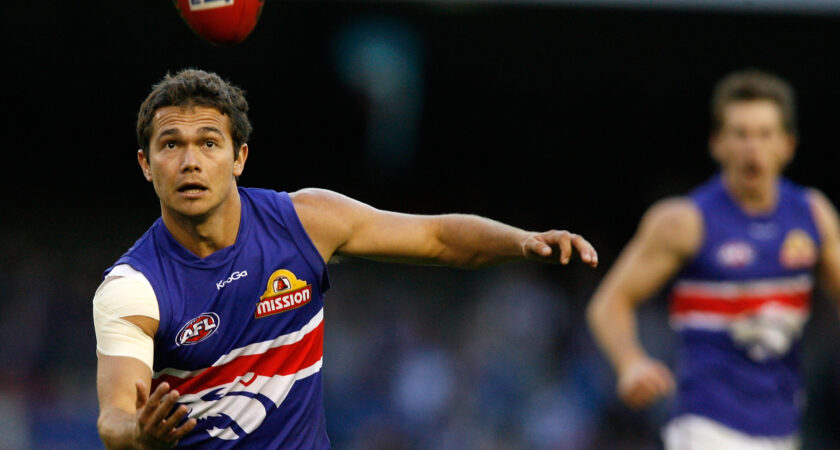 Remember Glen Scanlon? The Queenslander who played nine AFL games with North Melbourne and the Western Bulldogs in 1977-78? If not you’re not alone. Because he’s a man with something of a confused identity.

Across four historical publications and websites the names of the former Coorparoo player are spelt four different ways. There’s Glen and Glenn. And Scanlon and Scanlan. No definite confirmation of which is right.

But what is definite is that he played a cameo role on one of the great days in Bulldogs history.

Ian Dunstan kicked 7-3 and a 22-year-old Scanlan came off what was then a reserves bench to kick two goals. In his fourth game for the Dogs, his eighth game overall and ultimately his second-last game, it was a career best.

Scanlan was the second Queenslander to play for Footscray in the VFL after ex-Wests junior Alan Hunter played 15 games in the 1960s.  They are two of 11 Sunshine Staters to wear the colors of the club that joined the then VFL in 1925.

Founded in 1877 in the inner western suburb of Melbourne, they’d won nine premierships in the old VFA before stepping up to the premier competition with Hawthorn. They won the flag in 1954 and after changing their name from Footscray to the Western Bulldogs at the end of 1996 for marketing reasons picked up a second flag in 2016, becoming the first club to win the flag from 7th on the home-and-away ladder.

As the Dogs prepare for Saturday’s 2021 grand final against Melbourne in Perth we have traced the club’s Queensland Connection.

It is one that has a strong connection to the Brisbane Lions coaching staff, where the two Queenslanders who played most often for the Dogs are now based.

Having seen their own 2021 finals campaign ended by the Dogs in a frantic one-point semi-final result at the Gabba, Mitch Hahn and Ben Hudson will now job on the Dogs bandwagon for what shapes as one of the great grand finals.

Hahn, a Kedron junior, played a Queensland-best 181 games for the Dogs from 2000-10 after being drafted at #37 in the 1999 National Draft from the Northern Eagles. He went one spot ahead of Geelong premiership captain Cameron Ling with a pick the Dogs had received from Richmond in a trade for Leon Cameron, now the GWS Giants coach.

A bullocking 188cm utility player who played predominantly up forward, he squeezed every last drop out of his AFL career to rank 36th among 1031 Dogs on the all-time games list and 1st for games in jumper #8.

Part of the club’s leadership group at his peak and enormously respected at ‘The Kennel’, he was also the leading goal-kicker in the Dogs Queensland Connection (164), polled most Brownlow votes (20) and equal most finals (9) before returning home to join the Lions coaching staff in 2013. With a preference for development coaching, he’s now the clubs Reserves coach.

Hahn was joined on the Lions coaching brainstrust in 2015 by Hudson after the pair had played together at the Dogs from 2008-10 after Hudson had played at Adelaide and before short stints with Brisbane and Collingwood to finish his career. Hudson played 88 games in jumper #15 including nine finals.

Hahn and Hudson played together in nine finals in 2008-09-10 when the Dogs had a supercharged Queensland connection.

Jarrod Harbrow, recently retired Gold Coast Suns games record-holder, also played for the Dogs in the same nine finals in jumper #40 in a 70-game start to his career after getting a chance via the rookie draft.

A fifth Queenslander played for the Dogs in the 2010 finals series in the highlight of an injury-ravaged 85-game career from 2007-14. Tom Williams, a rugby union convert whose father Steve was a co-founder of the Brisbane Broncos, was drafted from Morningside with pick #6 in the 2004 National Draft – in between Hawthorn’s selection of Lance Franklin at #5 and Jordan Lewis at #7. He wore jumper #12.

Earlier, adopted Queenslander Richard Murrie had played 68 games in #26 for the Dogs from 1975-79. Originally from South Australia but recruited from QAFL club Mayne, he later played 35 games at Geelong (1980-82) and eight games at Richmond (1983).

After Hunter, Murrie and Scanlan, the fourth Queenslander to make his way to Whitten Oval was Mark West, an Indigenous utility player originally from Darwin who played with the Cairns City Cobras and Brisbane Bears Reserves before being drafted by the Dogs from South Adelaide in the SANFL.

West, a dreadlocked midfielder, he was taken by the Dogs with pick #43 in the 1995 National Draft – four spots before North Melbourne claimed AFL games record-holder Brent Harvey. Now 48, he played 16 games in four injury-plagued seasons at Whitten Oval, including four finals, and contested the 2004 Federal Election as a ‘Family First’ candidate in the NT seat of Solomon, receiving 2.1% of the vote.

Completing the Dogs Queensland connection is James Mulligan, a Southport product who played three games in #31 in 2011.

The Bulldogs’ Queensland connection will have strong representation in the grand final via jumper numbers, with as many as six and possibly to be represented. Ex-Lion Stefan Martin will wear Hahn’s #8, Jack Macrae will wear Reid’s #11, Zaine Cordy (if selected) will wear Williams’ #12 and Taylor Duryea will wear the #15 jumper worn by Hudson and briefly Hunter. Tom Liberatore will wear Akermanis’ #21, Bailey Dale will wear Mulligan’s #31 and Bailey Williams will be in West’s #34.

IMPORTS FROM THE BULLDOGS

While the Bulldogs have feasted on Queensland talent, it’s worked the opposite way, too. The Bears/Lions have picked up nine ex-Dogs, headed by Brownlow Medallist Brad Hardie, the club’s first 100-gamer, ex-captain Jim Edmond, who was also a member of the Bears’ first side, and 1991-95 Bears club champion Michael McLean, who played 88 games before taking on a coaching role.

Rod Macpherson played seven games in Brisbane’s 1987 debut season, Andrew Taylor, a one-game Dog in 1983, played 31 games with the Bears (1888-91), and Shannon Corcoran squeezed five Bears games in between time at the Dogs and the Swans.

Post-merger, Michael Martin played 10 games with the Lions in 2000 ahead of Ben Hudson and current player Marcus Adams, who completed the list when he headed to Brisbane in 2019.

The Gold Coast Suns have fielded two ex-Dogs – Jarrod Harbrow and Jarrad Grant. Current player Darcy Macpherson is the son of 188-game club favorite Stephen Macpherson and the nephew of Rod Macpherson but was overlooked by the Dogs as a potential father/son choice.

Another ex-Dogs player has had a huge impact on Queensland football without playing. Max O’Halloran, who played 16 games with the club from 1972-74 before five games at Carlton to close out the 1974 season, has spent much of his latter years in Cairns. After playing with South Cairns he was player-coach at North Cairns, where he took the club to two premierships, and later a premiership coach at Cairns Saints. He was also assistant-coach of the Queensland Country representative side and served on the board of AFL Cairns from 1998-2007 before going into politics.

The Queensland connection to the grand final will be further enhanced by the presence in the Dogs side of ex-Lions ruckman Stefan Martin and a rejuvenated Josh Schache.