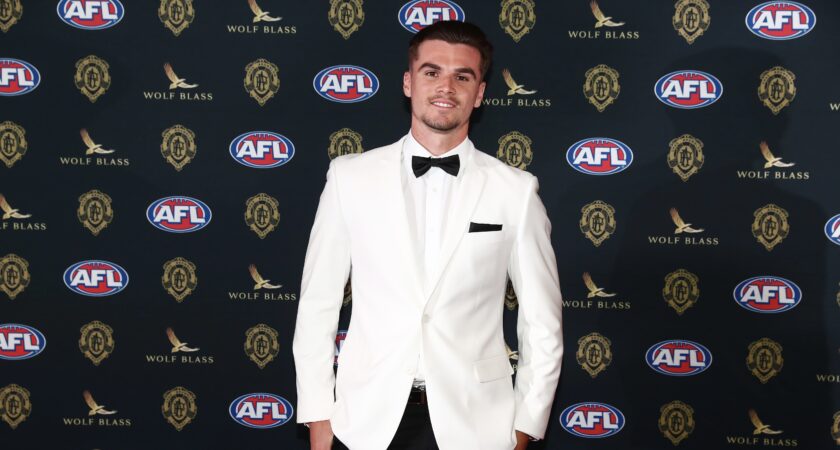 There was a slightly weird ‘look’ in the room at the Gabba on Sunday night as Port Adelaide’s Ollie Wines won the 2021 Brownlow Medal and Dayne Zorko topped the Queensland count.

Sitting among the Lions players for a medal count conducted by zoom across four different states was Adelaide’s Ben Keays, who was delisted by the Lions two years ago after four years and 30 games.

Captain of the 2015 Queensland Under 18 side and the Lions’ second pick in the 2015 draft behind Eric Hipwood, the Morningside junior had been unable to secure a regular spot in the Brisbane side.

Only a career lifeline from the Crows saved the career of the top-flight junior.

Back home with family during the off-season, Keays could have been excused for being a little uncomfortable walking into a room full of people from the club that sacked him, he would have been head up and shoulders back walking out.

While Zorko topped the Queensland vote tally 14 and his Brisbane teammate Jarryd Lyons polled 23 votes to finish equal 13th, Keays held his own with 11 votes.

Zorko polled six times, including twice against minor premiers Melbourne, and topped off with breakout season with three votes in the Round 23 win over North Melbourne, when he had a career-best 38 possessions and an equal career-best two goals.

He was second in the Adelaide vote tally behind All-Australian squad member Rory Laird (16).

Keays’ other votes were:-

Round 1 – one vote for 23 possessions and seven clearances in the upset win over Geelong.

Round 10 – one votes for 34 possessions and two goals in the shock win over Melbourne.

Round 15 – one vote for 30 possessions and a goal in the loss to Carlton.

Round 22 – two votes for 29 possessions (16 contested), 11 tackles and eight clearances in the loss to Melbourne.

Zorko, who did not poll in the first eight games, rattled home after serving a one-match suspension in Round 14, picking up three votes in Round 15 against Geelong, Round 21 against Fremantle and Round 23 against West Coast.

It was his third double-figure tally and the second time he has led the Queensland count.

Aliir’s seven-vote bag included three votes in Round 4 against Richmond and Round 19 against Collingwood and justified his All-Australian selection.

Hickey, who had polled only once in 10 years and 102 games before he joined the Swans this year, was the other early bolter. He went 1-2-1 in his first three games in red and white. But that was it.

In Round 7, when the ex-Morningside ruckman returned from a one-week lay-off minus one posterior cruciate ligament, he got 10 coach’s votes against Geelong and a wipe from the umpires.

Dixon suffered a similar fate in an extra-contentious Round 15 game against Sydney. He got the maximum 10 votes from the coaches, ahead of Sydney’s Luke Parker, who received eight.

Five other players were recognised by the coaches but neither Dixon or Parker polled a medal vote. Wines, not among the seven players in the coach’s votes, received one medal vote. And he won by one vote.