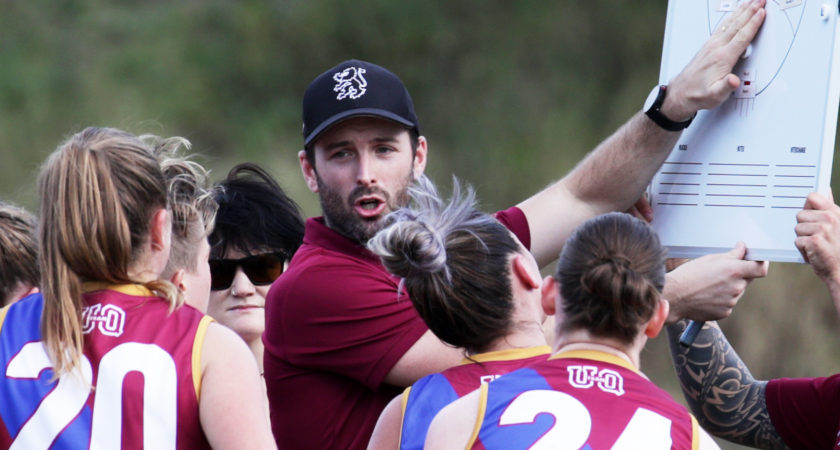 University of Queensland Red Lions head coach, Phil Lovett, is adamant his side can still make the finals in 2018 despite the team’s Round 12 loss to Coorparoo.

The Red Lions find themselves one win outside of the top four, but face an uphill battle if they are to return to finals action for the first time since 2016.

A strengthened line up, bolstered by the likes of Sharni Webb, Sabrina Frederick-Traub and Kate McCarthy couldn’t get the side over the line against the Kings on Sunday evening, as the side suffered a 46-point loss.

“I think we can still make finals. I think we showed in patches today that our good footy does match it. We just have to match it for the full four quarters,” Lovett told aflq.com.au following the loss.

“With the games we have coming up, I still think we can make it and still have an impact.”

The showdown against Coorparoo poised to be a season defining performance for the Red Lions and now, given the loss, the side find themselves on the back foot.

University of Queensland managed just two goals to the Kings’ ten after quarter time as the home side struggled to curb the spread and counter attack of their opposition; something Lovett admitted following the game.

“They [Coorparoo] beat us in the spread easily. They were really good at stoppages and we managed to shut that down,” Lovett said.

“They were still able to spread and that’s where they were able to get their run from.”

In 2018, the Red Lions boast perhaps one of the most talented squads in the Bond University QWAFL.

But the side haven’t found consistency in numbers and training – something that has impacted their game day performance this year having won just the three games to date.

Fortunately for the side however, fourth-placed Bond University also suffered a loss in Round 12 meaning the gap between University of Queensland and the top four doesn’t stretch beyond one win.

But the quest to ascend the ladder may prove a mammoth task for the team.

A bye in Round 13 means the side lose an opportunity to bridge the gap and their next game comes against the undefeated Wilston Grange who have scored almost double the Red Lions’ points this season.

Yet still, the team at University of Queensland remain optimistic.

“We did match it for three quarters last time against Wilston Grange,” Lovett said, “Now, we just have to do that for the four quarters.”