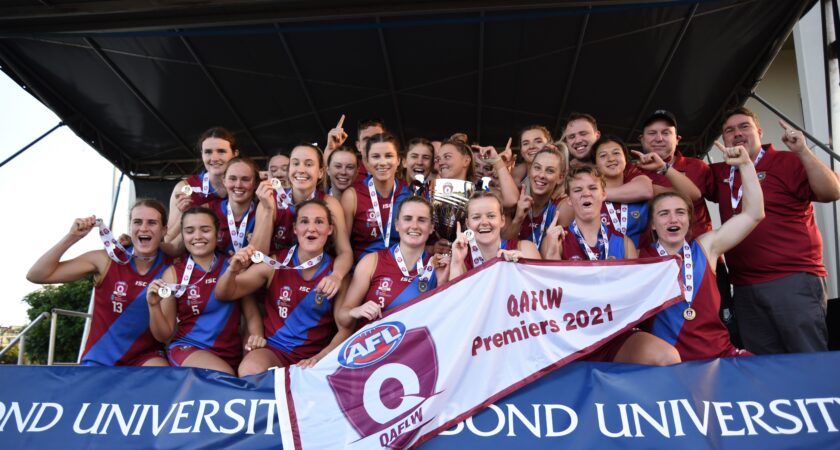 Nearly two thousand people turned out at Leyshon Park for the Bond University QAFLW Grand Finals, with thousands watching on the live stream, and all were treated to two sensational games of football with all of the trimmings.

From fourth-placed on the ladder to Grand Final Champions – Bond University have claimed their second QAFLW Development League Premiership in three years.

There was a sense of déjà vu at Leyshon Park – a 2019 Grand Final rematch with the Bullsharks and Kings facing off.

Bond got straight to business from the bounce, dominating the first half of the game and looked slick across the park.

But the Kings staged a third quarter come back, keeping the Bullsharks to just one behind.

Ellie Bowden kicking Coorparoo’s third goal of the match, ensuring the Bullsharks supporters were kept on the edge of their seat.

Two goals to both teams in the fourth made for a thrilling fourth term, but a late goal to Caitlin Thorne safeguarded victory for Bond as they went on to win 6.8-44 to 5.2-32.

The Premiership over the Minor Premiers not lost on Bond University Head Coach, Beth McLaughlin.

“Coorparoo have beat us every time we played them this year and there was only seven points in it last game so it just goes to show how close a competitor they’ve been to us,” she said.

“It was great to be against them, because to be the best, you’ve got to play against the best. And they were definitely it this year.

“It’s my first premiership as a coach so it’s super, super exciting and I am so proud of the girls.”

A spirited effort by Clara Dahlenburg saw her awarded Best on Ground.

“She worked her heart out the whole game, she was fantastic and well deserved the best and fairest medal,” said McLaughlin.

“Little Amelia Cronin also impressed me, she’s everywhere and she’s really found her stride this year and Laura Ernst in the forward line, our old girl, she’s pushing the older years now and she just gave it absolutely everything.”

University of Queensland vs Bond University

History was already made when UQ made the 2021 Bond University QAFLW Grand Final, and their maiden finals appearance didn’t disappoint.

And that they did.

The university showdown living up to all expectations, with both university Vice Chancellors on the sideline cheering on their respective teams.

Like they did in the earlier Development Grand Final, Bond got to work quickly, stacking on 22 points in the opening term, with a strong 16 point lead.

Running towards their rowdy Red Lion supporters on the scoreboard hill, UQ muscled their way back into the game and brought the score within two points, mid-way through the second.

But a fired up Kalinda Howarth hit back, snagging two goals (of her three goals of the match). One from the boundary line at a somewhat impossible angle, off the right foot to thread the tightest of needles, all while making it look easy.

“They (Bond) were beating us heaps around the contest and centre clearances. So as a mid-field group, being down by that much, we knew if we didn’t step up, we were going to crumble,” said Hunt.

Head Coach Ross Clayfield admitting they were a little too slow out of the blocks.

“We hadn’t played for three weeks and that was a comment from the girls when they come off at the first break – how much they were struggling after that long a break,” he said.

“I’d like to say it was a really inspiring speech at halftime but it was about keeping our composure and staying calm.”

As the sun started to set and the cheers from the crowd continued to rise, a goal to Bre Koenen got what would be a massive term for UQ underway.

The Red Lions with the lead for the first time in the game at the 12-minute mark, and from then on the points piled on.

UQ booting 11 goals in the second half of the game, to Bond’s two, to win the game by a whopping 40 points.

As expected, Dakota Davidson shone on the big stage and under pressure. Bagging four goals and giving the photographers a field day with the celebrations that go with. Her performance securing her the Best on Ground Medal.

“Daks (Dakota Davidson) was phenomenal, Bre Koenen was awesome, Maria Moloney worked her way into the game and some of her work around the stoppages that often goes unnoticed was incredible,” said Clayfield.

“There were so many of the forwards who excelled; Luka (Yoshida-Martin), Greta (Bodey) who gave us heaps. Our wingers – Madi Crowley-Long and Jane Childes – they kept working and working and working. And our backline, that looked a little vulnerable early, just stuck to the task and they pulled together well.

“I think it’s fair to say we didn’t think the Premiership was possible at the start of the season but we just stuck to the task all year and quietly built and built and placed a lot of focus on good people and good culture and getting the right process in place. I know that sound’s really corny but I feel like that’s what’s really brought the group together and got us the win today.”