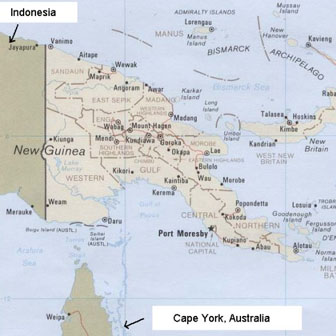 Local footballers are being offered a unique opportunity to represent their country at AFL and enjoy a no-holds barred adventure through Papua New Guinea in the process.

The AFL PNG Kokoda Challenge is being held from 9-13 March as part of Australia Week across the nation.

The centrepoint for AFL PNG is a promotional football match between the national side, the PNG Mosquitoes and an Australian Invitational team.

Former Sydney superstar Adam Goodes is slated to play as a guest with the Mosquitoes, who won the last International Cup in Australia three years ago.

There are still positions for 2-3 players in the Australian Invitational squad, with all applicants aged 18-35 who are still playing the game and like a challenge considered.

A set itinerary is already laid out for the members of the Australian contingent, flying out of Brisbane on 9 March and undertaking a war cemetery tour that afternoon.

There is a Kokoda Track visit on the 10 March, with players staying overnight in a local village.

There is a fishing or golf trip on the 11th, a social gathering that evening, and the PNG-Australia ‘Test’ the next day.

“Players need to know it is a rough tour, no frills but plenty of fun,” said AFL Asia Pacific manager Andrew Cadzow.

“They should be prepared to be immersed into PNG, the land of the unexpected. This is not a holiday at the beach like Thailand or Bali.

“They will see the ‘real’ PNG and make lifetime links to PNG footy.”

The tour levy of $950 covers all airfares, accommodation, visas, transport and two meals per day.

Expressions of interest can be made to asiapacific@aflq-new.fspdev.com or call Scott Reid on 0410 533 675 for more information.