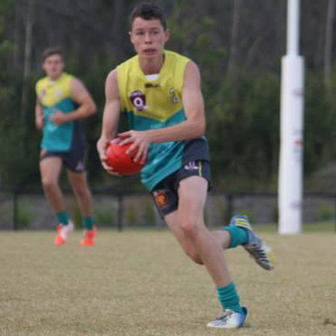 Sunshine Coast umpire Ben Moller has been named the “Best Field Umpire” under the age of 15 at the recent U15 State School Boys Championships.

Ben’s AFL ability is not only with the whistle, he is excellent player; gaining selection in the U16 Sunshine Coast team for the recent AFL Queensland U16 State Development Championships.

He first started officiating to give his umpire dad a hand with Wide Bay juniors on Friday nights and believes being an umpire has helped his understanding of the game he loves – as well as enabling him to explain to his teammates some of the more technical rules.

“I prefer playing but when I can’t play I umpire just to stay involved in the sport I love,” said Ben.

He umpired at the Under 12 National Championships in Darwin last year and has gone on to even greater things this year.

Ben says he has no plans at this stage to pursue an AFL umpiring career, opting to first see where his playing career takes him.

Ben will now go on to represent Queensland at the National School Boys Championships in Sydney from July 19 – 26.

State of Play: Lachie Weller
Mozzies shaping up for IC14