Mozzies shaping up for IC14 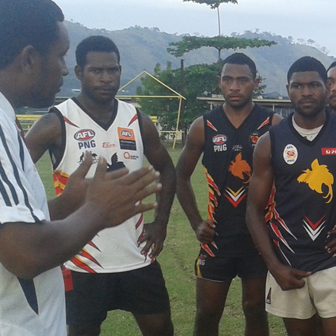 Papua New Guinea’s elite Mosquitoes team is shaping up for the 2014 International Cup with the initial Emerging side trimmed down to 36, as training continues for AFL PNG’s crème of the crop.

The Emerging Mosquitoes brings together the best footy players PNG has to offer currently playing in the country as well as in Australia, most of whom have come through AFL PNG’s Talent Pathway and are now playing with feeder clubs around Australia.

With training starting as early as mid 2013, PNG is no doubt a top contender in the tussle to win the International Cup title, having earned a spot in the past five grand finals since 2002, and making the country proud when they won the 2008 cup.

“Every three years, more countries have joined in the challenge to try to win the AFL International Cup but PNG has consistently won through to the final winning once but consistent performing as Runners Up three times. At IC14, 23 countries are expected to compete in the men’s division and seven in the women’s division.

“In 2014 we hope to defeat all challengers getting over the top of traditional rivals Ireland and New Zealand, with their taller athletes and significant resources and ensuring no-one catches us off guard like perennial IC challengers Nauru, Samoa or Japan,” said AFL PNG Board Chairman, Scott Reid.

The squad, which was trimmed down to 36 last week, includes;

The final team of 28 will be made known by the end of this month.

Mosquitoes’ trainer and 2008 Captain of the triumphant Mozzies, Rex Leka, said the boys have gone through a lot of fitness training and are looking good to take on the IC14.

“We already have ten top athletes currently playing in Australia, who are in the team. Combined with another top 15 boys from home soil, we are in no doubt a powerhouse this year. Boys who will give us the much needed figures to make a difference include the experience of Donald Barry, Emmaus Wartovo, Amua Pirika, Peter Labi, Willie Aisi and John James with a few young guns who will add more sting to the Mosquitoes bite this year.

Leka said; “The final selection for the 2014 PNG Mosquitoes boils down to one thing – and that is, who is serious about wearing the PNG jersey and being a good ambassador, come August.

The 2014 International Cup will be held in Melbourne, Australia, from August ninth to the 23rd.

Travelling alongside the Mosquitoes is PNG’s women’s team – the Flames – who will attempt the International Cup for the second time.

With sponsorship not yet confirmed for either team, AFL PNG is extending an invitation to business houses in the corporate sector for a positive partnership in its’ bid to win the 2014 International Cup.