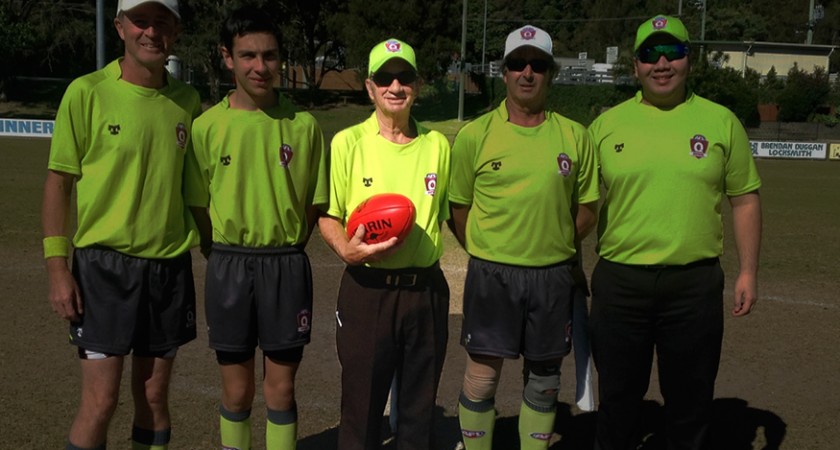 Goal umpire Peter Taylor reached 900 games last weekend in a career that started in Geelong back in 1989. That is just under 400 games more than record holder for field umpiring, and AFL Hall of Fame umpire inductee Tom McArthur.

Peter’s remarkable milestone was recognised before the QFA division 2 clash between Coolangatta and Alexandra Hills with a special guard of honour from both senior teams.

Peter had nothing but praise for everyone who took part in honouring his umpiring milestone.

“The guard of honour at the senior’s game was really good by them, I never expected it but it’s something you don’t get every game so I have nothing but thanks to everyone who was a part of It,” said Taylor.

The beginning of Peter’s goal umpiring career was motivated by his desire to stay involved with his daughter Taylor and her AFL participation.

Luckily for Peter, a friend whose daughter also played in the same team was an umpire, which opened the door for Peter’s umpiring career.

“In Geelong, my daughter and a friend’s daughter did little athletics together and after they finished and changed to footy, I went down to her club to see how I could stay involved with her sport,” said Taylor.

I was having talk to my mate and he said I’ve got an umpire vacancy lined up for you. Which one would you like to do and I said goal umpire. Soon after that I was pointed to the umpire trainer and I’ve been doing it ever since 1989” he said.

Peter was ready to put down the flags when he moved up to the Gold Coast a few years ago but his daughter Taylor had already put Peter in an umpiring role.

“I was going to retire and she said nah you can’t do that dad because I’ve already booked you in to do umpiring. So, then I said well you’re going to have to drive me around to all the grounds so I know where they are” said Taylor.

Reflecting on his career so far, he has found that the umpires have a tight knit community who all worked as a team to officiate the game.

“With a good umpiring crew, they all work together that’s what I found out and I’ve never had a bad word or moment with any other umpire” said Taylor.

After 900 games Peter still has one goal he wants to reach in his career.

“If I get to 1000 games I will be happy and that will be it providing I don’t get any more injuries. But as they say its old age that’s torture”, said Taylor.

If Peter were to reach 1000 games that would be more umpired games than both Hall of Fame umpires Tom McArthur and AFL level record holder for most umpired games Rowan Sawers.