U16 Scorpions downed by Tassie 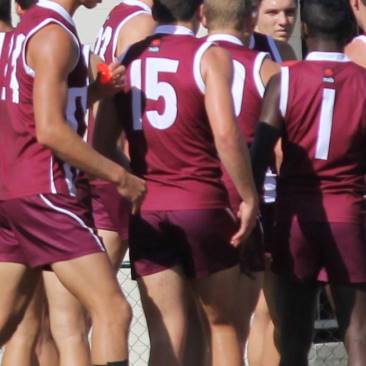 The Queensland Young Scorpions went down in their match against Tasmania today.

A strong second half wasn’t enough for the Queensland U16 Scorpions to claim their first nationals win, over Tasmania today.

The Queenslanders were caught out early, slumping to a 17-point loss to the Apple Islers.

After kicking the first goal of the match, the Young Scorpions were second to the footy and fell behind in the contested possessions, to trail by 120 points at the first change.

Admirable efforts from Blake Hartley and Charlie Driffield were not enough to stop the flow in the second term, with Tassie drifting out to a 19-poitn major break advantage.

Thigns turned around in the second, with Tom Michael and Kurt Skuse threatening up forward and Nate Dennis clinching the hit outs.

After whittling the lead down to nine points, a steadier to Tasmania gave them breathing space going into the final quarter.

Poor decision making and disposal inefficiency unravelled the Queenslander as they tried to make a last term comeback, despite the increased impact of players such as Adam Tipungwuti, Cory Wagenr and Didymus Blanker.

Trailing by 11 points with only five minutes to go, the Young Scorpions let some golden scoring opportunities slip through their fingers and Tasmania kicked one more in the shadows of full-time, to run out 17 –point victors.

The Scorpions have a chance to finish their 2013 campaign on a high note, facing NT on Saturday.

The Territorians went down to NSW/ACT in their match today, putting the Rams in the box seat for the title.