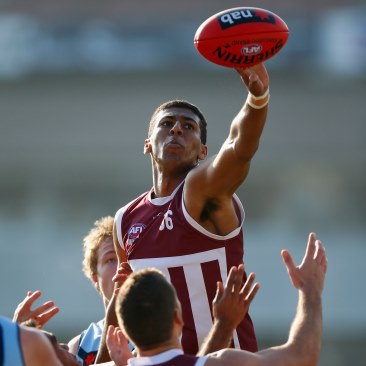 Jono Freeman and Archie Smith have been invited to the 2013 National AFl Draft Combine.

Two Queenslanders have been invited to the national draft combine, to be held in October.

Aspley’s Jono Freeman and Mt Gravatt’s Archie Smith were selected to attend the combine, on the back of strong rep seasons.

Freeman was one of the Scorpions’ standout players, particularly in the Div 1 games, playing as an over-ager.

“It’s fantastic to see Jono and Archie be invited to the combine,” he said.

“Jono’s persistence and effort has really paid off this season and it’s really good to see him rewarded for that.”

Freeman, based on the Sunshine Coast, impressed with his marking abilities early in the Scorpions’ season, before an injury ruled him out of the final rounds of the national championships.

Smith has made a swift impact on Aussie Rules, after switching from basketball in late 2012.

Having played less than 20 senior games, Smith has improved quickly, showing talent in the ruck for the Vultures and the Queensland U18 side.

Smith was one of Queensland’s most consistent players through the nationals campaign, and could follow in the footsteps of numerous other former basketballers if he is picked up this year.

The NT’s Errin Wasley-Black and Daniel Cox, who both play in the NEAFL Northern Conference, were also invited to the combine.

Wasley-Black has impressed for the Thunder this season, and is a highly rated potential draftee.

Cox debuted for the Thunder in Rd 11 this season.

Here is the full list of players invited to the 2013 AFL National Draft Combine.

Other Queensland hopefuls will have a chance to show their stuff at the state screening in Melbourne in early October.