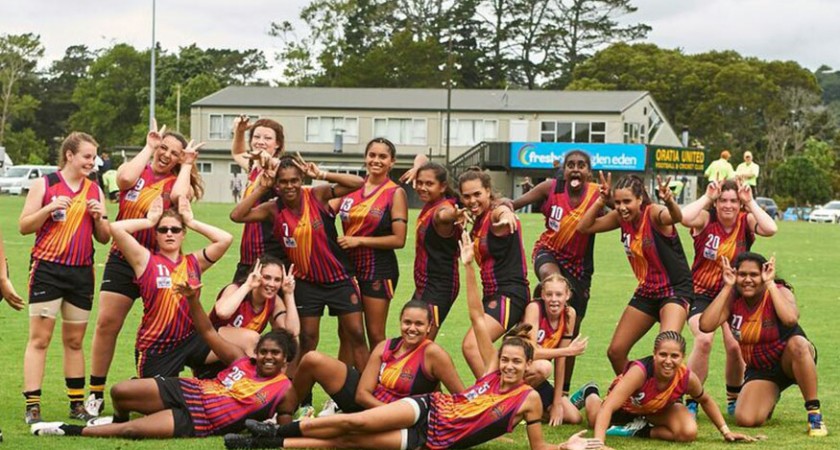 The AFL Indigenous Woomeras tour of NZ concluded on Sunday afternoon at a sunny North Harbour Stadium where the touring side defeated the U18 New Zealand Kahu in both games of the series, with both sides showing great skill and tenacity throughout the campaign.

It is the second time the AFL Indigenous Woomeras have toured NZ which saw them spend ten days travelling around the North Island and visiting places such as Rotorua and completing the Tongariro Crossing. The trip was designed to encourage leadership whilst testing them physically and mentally. Parrs Park hosted Game 1 of the Woomeras tour of NZ. Both teams started the game trying to get a feel of how the opposition played but it didn’t take long for the Woomeras to get a score on the board.

While large periods of the match saw the Woomeras dominate, the Kahu were very competitive throughout the game.

New Kahu Captain Kayla Paniora (Western Springs College) was rock solid in defence all game and stepped up to provide leadership in the backline.

Goals continued to flow for the Woomeras, with the electric Delma Gisu (QLD) cutting through the middle of the park and Madison Yarran leading the scoring with 6 goal. The Woomeras forwards were supported by a fantastic midfield, in particular Pamai Dau (QLD) who both provided plenty of assists for the goalscorers.

In the second half, Epsom Girls Grammar student Killarney Morey produced a spectacular run down the outer wing by evading 3 players and throwing in a bounce to boot.

The game ended with the Woomeras convincing winners but the Kahu could hold their heads high as they never gave in and continue to work towards Game 2.

Notable performance went to newcomer Jolyn Collins of Massey High School who produced a best on ground performance in her first game representing her country. The second and final game in the series was played at North Harbour Stadium which the newest AFL ground in the country. A great crowd turned out to watch not only the Kahu play but also the U13 and U17 Youth competition which were held before and after the main event.

The match started with a flurry of points to the Woomeras, but by the end of quarter, the Kahu had achieved parity and were stringing together kicks and marks.

Between the first and second matches of the series, the Kahu showed dramatic improvement.

While that was in part down to a better defensive effort, they also cleverly controlled possession for long periods, playing sensible marking oriented football.

The leadership shown by senior players Ivy Kalepi Esera, Setareh Brown and Kayla Paniora was immense, as they marshalled their troops through the match.

International debutants also made their mark on the game, with Misialofa Saamu from Hobsonville Point Secondary School showing strong skills and athleticism, and Kara Hotere constantly finding ways to involve herself in the game.

The Woomeras were again classy when given opportunities, running excellent lines and playing skilfully with the footy in hand.

The Kahu produced the best quarter in the third, where they put together a fine team performance and in patches outplaying their high quality opposition. Playing with composure and structure, the Kahu held the Woomeras to just 3 goals for the quarter.

AFL New Zealand CEO Robert Vanstam noted the spirit the series had been played in.

“The most important element of the series for me has been the respect the two teams have shown for each other. Sometimes when we play football it can get heated and frustrating, and of course we should be trying to achieve wins. But there was a lot of respect here, and you should be very proud of that. What I saw in the two games was people who were very excited to be playing football.”

He also thanked the parents of the New Zealand Kahu for being open minded in providing their children with the opportunity to play a new sport.

“If we look at what the Woomeras tour is about, which is leadership, the biggest success to date has been the leadership you have been provided by your coaching staff and those who run the Indigenous Programme. That’s a stepping stone for you to showcase you leadership skills in your communities, where you will make the choices about what sort of football environment you want to be in.” Robert Vanstam also paid tribute to the burgeoning leadership skills of the Woomeras players, and to their coaching staff who had pulled the tour together.

With the tour concluded, the AFL Indigenous Woomeras will return to Australia, where they will be able to share their experiences with their communities and fellow football players.