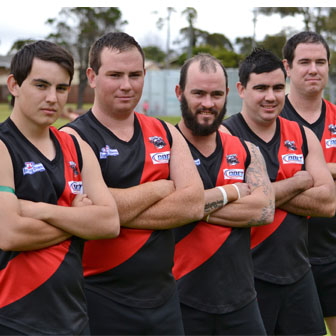 Bombers Brothers Ben, Luke, Craig, Jarred and Dylan Newman banded together for the first time since child-hood when South Toowoomba took on the Warwick Redback’s in the clubs recent Allied Pickford’s ‘A’ Grade clash at Rockville Oval.

Luke coming up from Adelaide presented a unique opportunity for the Bombers to play the five siblings in the same match, something that hasn’t been seen before in a Darling Downs fixture.  This would have been the first since their backyard footy days that all five brothers could play together on the same team.

It could have been the advantage the Bombers needed, as South Toowoomba managed a narrow win against the Redbacks’ 9.14 (68) to 8.8 (56).

All five lined up in different positions across the paddock with Ben on the half-back, Craig on-ball, Jarred on the wing, Dylan playing in defence and Luke starting interchange. But they did share a special moment when the final siren sounded and all five brothers celebrated the hard fought victory.

Second eldest and club captain, Ben said while their household had always been big on footy this was the first time the five brothers had played on the same team.

“With Luke in town and a home game against the much improved Redbacks, it was good to have the five of us playing in this big match,” he said.

“This was a bit of a personal mile-stone for the family, all five of us usually only had a kick around in the backyard when we were younger”

“Mum used to drive all five of us every weekend to our footy matches, which was usually an hour or more from home,” Ben added.

The scary part of this for opposition teams is that this isn’t all of the Newman brothers; there is actually one more brother. Newman said there was seven siblings all up, six boys and one girl but remarked that having all six brothers playing at once would be unlikely.

“Tyler is the youngest of the family but he doesn’t play footy at the moment and is more into music and the arts,” Ben said.

“Though you just never know, we will work hard to get him on the paddock for a game or two,” Ben said of his non-footballing brother Tyler.

This weekend the Bombers are back to just the four brothers (Ben, Craig, Jarred and Dylan) as they take on the Dalby Swans at Owen Street in Round 9 of the Allied Pickford’s Premiership season.

PHOTO: All five Brothers wearing the same team jersey for the first time in a fixture game from left; Dylan, Jarred, Craig, Ben and Luke Newman.