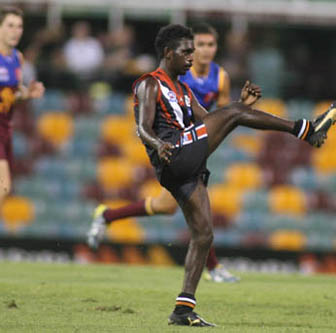 A depleted NT Thunder outfit produced their best football in Alice Springs this season to gun down the Western Magpies by 80 points yesterday.

An injury-hit NT Thunder produced a fine brand of football in the opening three quarters to power past the Western Magpies by 80 points in Alice Springs yesterday.

While they were outscored by the bottom team in the final term, the Thunder were still happy to come away with a big win after losing class players during the week and early in the game – again.

With quality performers Aaron Motlop, Brett Goodes and Cameron Roberts out injured and Jake Dignan and Shaun Tapp hurt early in the second term, Thunder coach Murray Davis could have been excused for feeling nervous.

But his army of teenagers – there were seven members of the NT Under 18 team in the side – ran their hearts out, with the inspiring Bradley Palipuaminni showing them the way.

When at the top of his game, there is no better player in the QAFL to watch, and Palipuaminni dazzled from his half-back flank.

His speed could not be countered, he used the ball superbly by foot, and kicked two goals himself to cap a wonderful display.

“Bradley was outstanding – he and Shannon Rusca really set up the play for us,” Davis said.

With a sizeable crowd venturing to Traeger Park for the Thunder’s fourth and final game in Alice Springs this season, and with a record seven locals in the NT side, they were stunned early as the black-and-whites kicked the first two goals.

However, that sparked the Thunder into action and they booted the next eight goals in 20 minutes to put paid to any thought of a Magpies upset.

Regular full-forward Darren Ewing had an electric start with four goals in the first term, the moved to centre-half-forward when Tapp went down, and kicked two more in the last.

The Thunder also got plenty out of their ruckmen, with Kenrick Tyrrell and Ryan Smith not only strong at the bounces, but also contributing five goals between them while floating forward.

“After the good win over Morningside (last week), we needed to back it up and not have a letdown,” Davis said.

“It was good to finish off our last game here with something for the crowd to cheer about.”

They certainly enjoyed watching Charlie Maher in action, the tiniest man in the QAFL throwing himself fearlessly into the action and being one of his side’s best players in just his fourth game back from a knee reconstruction.

The Magpies were well served by Ed McDonnell, who continues to battle away hard every week and should feature prominently in best and fairest voting, while Jye Spencer contributed four goals in a lively display.

Conrad Hudghton continued his development and Drew Mitchell was solid, but the Magpies have lost their last three games by a combined 259 points.

The come out of the bye hosting Labrador, while the NT have a winnable game against the Brisbane Lions at Coorparoo.