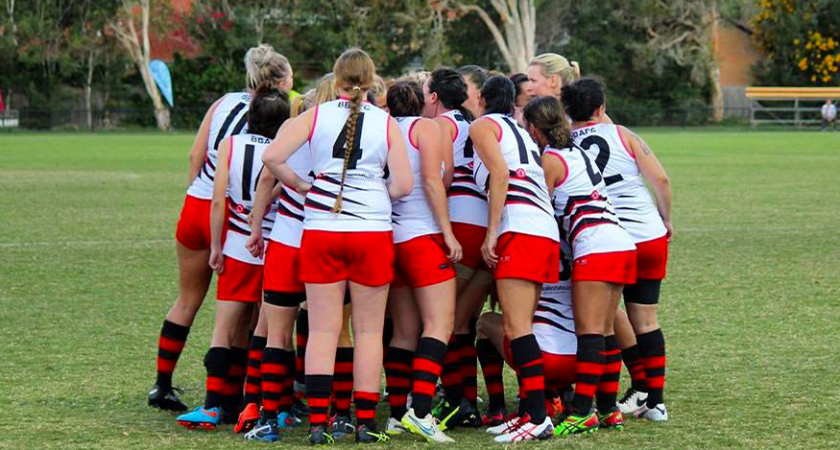 The Burleigh Bombettes are through to the QWFA Division 1 finals after finishing fourth on the ladder.

After only their third year in the competition, the club have managed to grow in numbers and make the finals for the very first time.

“Our team started as bunch of wives and girlfriends of the senior boys. We had only 10 girls in our first two seasons,” Emma Williams, the coach of Burleigh explained.

“However now we are a team of about 40. We have worked together and clicked to be able to achieve what we have.”

Having such a diverse team, Williams knew the importance of club culture to help bring them together.

“What I wanted to work on was culture, so we do lots of things off the field together. We go to functions, we go down to the dog beach and we all go surfing,” the coach said.

Nevertheless, the team still understands the seriousness of the game and the importance of managing their busy schedules to attend every training session.

“I have people who are parents and they all have full time jobs, which makes training twice a week really hard,” she said.

“But the day we do have everyone for that hour, it’s known that we are switched on. We call it, having our footy heads on.”

This season Williams has been working on improving the team’s understanding of the rules and how the game flows.

She keeps it as simple as possible, having full awareness that it is a complicated game and tries not to overload the new players with information.

“When I put them in a position I get them to really focus on that position. If they’re in the backline, to focus on getting that down pat.”

Along with the valuable coaching of Williams, Burleigh was also privileged enough this season to learn from two AFL industry professionals.

Sheedy discussed how the season was travelling, while Goddard led them in a training session and held a masterclass for the team.

“I went into this year wanting to push culture and listening to Bec speak, that’s what she did as well. It just reaffirmed that we are on the right track and doing the right things,” Williams explained.

“The girls got a lot out of it because of how positive Bec is. She lifted their confidence a bit by letting them know they are doing these things well, but also highlighted what we can improve on.

“Bec noticed that we needed to work on our kicking so that training session we did kicking drills that she thought (would) benefit us.”

Williams is encouraging supporters to come down to Burleigh on Saturday night, as they take on Coorparoo in the first elimination final.

“The more down there the merrier. Get down to Burleigh because we are a great club and a great bunch of girls. We say footy is family down here.”