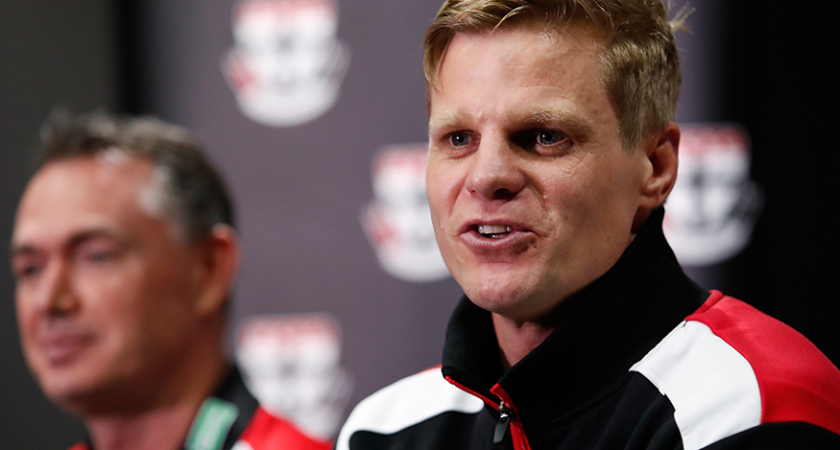 Friday, 13 July, 2001. Black Friday. A bad day for Malcolm Blight but a wonderful day for football and Nick Riewoldt.

An 18-year-old Riewoldt made his AFL debut for St.Kilda to begin a remarkable 17-year journey in the AFL in which he has stamped himself as one of the all-time greats.

He has joined fellow Queensland football products Jason Dunstall and Michael Voss as a potential AFL Hall of Fame Legend.

He sits comfortably alongside not just Dunstall and Voss but megachampions from every club after a career that is now within sight of the finish line after he announced on Monday time was almost up.

All going well, the 34-year-old will play four more home-and-games. And possibly finals.

In a week in which he has been lauded across the nation following confirmation of his retirement it’s fascinating to look back at where it all began for a young man who was born in Hobart on 17 October 1982 and moved with his family to the Gold Coast aged nine.

Drafted at No.1 in the 2000 AFL National Draft from Broadbeach via Southport after attending Robina State School and All Saints Anglican College, Riewoldt missed the first 12 weeks of his first AFL season with knee problems and played three games in the VFL.

A Hawthorn supporter in his youth, he was picked for his AFL debut in Round 15 after the Saints had been beaten by 57 points by the Brisbane Lions at the Gabba the week before.

Coach Blight, secured by the Saints at the start of the season on a massive $1m contract to replace Tim Watson, was under huge pressure as his side struggled.

They were 14th on a 16-team ladder with a 3-11 win/loss record as they prepared to host the 12th-placed Adelaide Crows at Docklands.

Riewoldt put his first kick in AFL football out on the full, finished with three kicks, one mark, no handballs and one behind, and immediately after the game asked his father Joe if he thought he would be a ‘one game wonder’.

Nineteen-year-old Chris Oliver, a 195cm ruckman from Campbelltown in Sydney who had been elevated from the Saints rookie list, made his debut in the same game against Adelaide.

Oliver had four disposals, but it was the only time he fared better than his fellow debutant. Oliver played just 10 AFL games – the last in Round 12 2003.

Riewoldt is the only player from his first game still playing in the AFL. Easily. His longest serving teammate from that night was close mate Justin Koschitzke, who had been chosen immediately after Riewoldt at No.2 in the 2000 Draft. And Koschitzke’s last AFL game was in 2013.

Josh Battle, the youngest player on the 2017 St.Kilda playing list and a Round 17 debutant while still at school, was two years old when Riewoldt debuted.

But quickly he found his feet. He played four games in a row from debut, missed two through injury, and played the last two of the season.

Then he played 70 games in a row from Round 1 2002, quite astonishingly winning the Saints B&F and the AFL Rising Star award in his second season as he set out in a career-long assault on the record books.

He’s played 333 games and kicked 714 goals, won the St.Kilda B&F six times, finished second twice and third once – in 2016. He was club leading goal-kicker four times, All-Australian five times (captain in 2009), and captained the Saints in a record 220 games.

Plus, he won the AFLPA Player of the Year in 2004, and seven times has polled double-figure votes in the Brownlow Medal, with six top 20 finishes and three top 10 finishes.

He was denied the ultimate team triumph when the bounce of the ball robbed St.Kilda of a possible flag in the drawn 2010 grand final, but otherwise he’s done it all.

Yet for one who has been such a public figure for so long, and the epitome of professionalism throughout despite a recurring knee problem that would have ended the career of money, perhaps the most defining thing about Riewoldt is that he did it his way.

For much of his career he spent a large chunk of the off-season living and training privately in the United States while visiting his now wife Catherine, with whom he has two boys – James (born 2014) and William (born 2016) – after they were married in October 2012 at her parent’s property in Waco, Texas.

Described by teammates as a book worm, he reads incessantly and loves nothing more than going diving off the east coast of Tasmania, where he owns a holiday house and spends as much time as possible.

There are not enough superlatives to describe his career professionally and personally, but perhaps his lasting legacy, pure football aside, will be something that is all about his late sister Madeleine, who died of a rare blood cancer in February 2015 aged 26.

Riewoldt and cousin Jack, the star Richmond full forward, established ‘Maddie Riewoldt’s Vision’ to raise awareness and funds for the fight against this terrible condition.

Not surprisingly, Riewoldt of the St.Kilda variety starred in his most recent ‘Maddie’s Game’ against Richmond, when the cousins worked so tirelessly for the cause.

Already the games record-holder and leading goal-kicker at Docklands with 182 games and  449 goals, he will leave a legacy at his long-time home that will take some beating.

Robert Murphy and the retired Brent Harvey (169)  are next on the games list at Docklands, while retired ex-teammate Stephen Milne (357) is next on the goal list.

Following selection Thursday night for Round 20 of the Toyota AFL season Riewoldt will return against West Coast at Etihad Stadium on Sunday.

Ironically, another All Saints graduate is the big Queensland news story to come out of selection.

After a horrid run with injury Kurt Tippett will return for the Sydney Swans against Geelong at Geelong Friday night.

It will be his sixth AFL game of the season and his first since Round 10 on 26 May. And it comes after three games in the NEAFL since mid-June, and a bye last weekend.

Aliir Aliir is a Swans emergency for big clash with the Cats, who retained Wylie Buzza for his fourth AFL game.

Tom Hickey has been named as an emergency for St.Kilda but is not expected to play.

Queenslanders Dayne Zorko and Eric Hipwood will return from suspension and a rest for the Brisbane Lions against the Western Bulldogs at the Gabba Saturday afternoon. Ben Keays is an emergency after being omitted.

Brayden Preuss retained his spot in the North side to play Collingwood at Etihad on Saturday nigh5t, and will share the ruck duties with a recalled Todd Goldstein after Majak Daw (foot() was forced out. Josh Williams is a North emergency.

Josh Thomas will play his sixth consecutive game for the Pies, while Josh Smith is an emergency.

Max Spencer will play his second game for the Gold Coast Suns against Fremantle in Perth on Saturday night despite the return of co-captain Steven May.

Alex Sexton, too, will play for the Suns despite being ko’d last week. Jack Bowes is an emergency.

Brendan Whitecross, hoping to play his eighth game of the year and his third in a row, has been named among the extended interchange squad for Hawthorn against Richmond at the MCG Sunday.