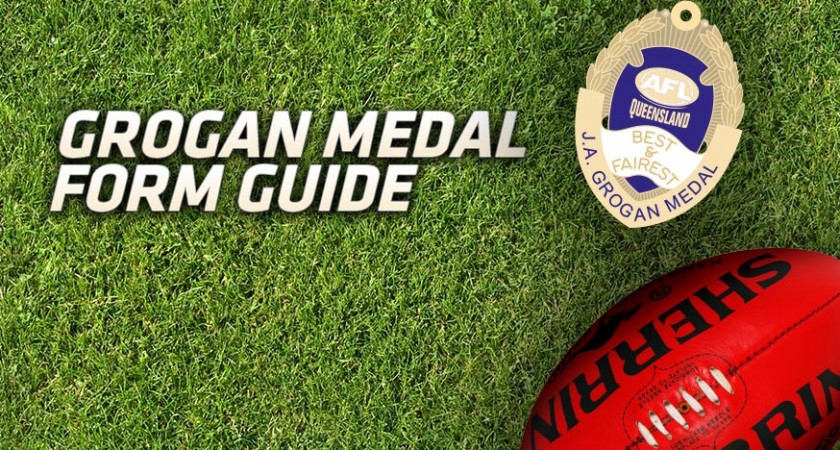 The Grogan Medal, awarded to the best and fairest player in the QAFL each, will be awarded for the 70th time this Sunday night.

I’ve gone and picked two players from each club I believe to be the most likely to take out the medal below, and given you the reasons why.

Taylor Haley: Haley’s last six weeks this year was as good as any forward in the game. He booted 54 goals for the year, which included 26 in the last 4 weeks. A quiet period in the middle of the season might make life a little difficult, but expect him to romp it home with votes.

Ryan Dienjes: Has had a very solid year for the Cats upon his return home, and there wont be too many stealing votes off him. His hard edge over the ball, and raking boot has propelled the Cats forward all year.

Adam Clarke: Has been a ball magnet for the Tigers this year. His contested work, combined with his outside run has been outstanding. His consistency will also be a huge factor in this vote count, named in Labrador’s best a staggering 16 times from 17 games.

Josh Fraser: He may have only played the eight games in the home and away season, but in terms of impact, there has been no better. Fraser kicked 47 goals this season, including two bags of eight and a bag of 10. He has been a match winner.

Lachlan Russ: Russ’ form has rolled on from grand final day 2014. His ability to win the inside ball, and then break lines out wide is second to none in the competition.

Nathan Kinch: A known vote getter, Kinch had a reasonably slow start to the year by his lofty standards, but finished with a wet sail. If he is within striking distance at the half way point, he will be hard to stop.

Todd Carbone: Has been the find of the season this year in the QAFL. This youngster has been super consistent in the midfield for the Vultures, sparking their running game from the outside.

Frazer Neate: The in-and-under captain. Neate has lead from the front all year for the Vultures, burying himself at the bottom of every pack. He might not top the possession sheet week in and week out, but rarely gets beaten one on one.

Todd Bryant: When the going gets tough, Todd Bryant gets going. With a young midfield around him, Bryant has been the standout Lion in the middle this year. His hard nose attack on the football should attract a lot of votes.

Josh Woolley: Through his leap, his attack on the ball, and his skill both sides of his body, Woolley puts on a show every time he plays. Playing all 18 games will certainly help his tally.

Darren Pfeiffer: No one can question Pfeiffer class. Played most of his minutes in the first half of the year in the midfield, where he was the go to man, but as the team improved, was able to go forward and be an option. Question remains whether UQ’s three wins will be enough for Pfeiffer to poll enough.

Harry Milford: Could be the surprise packet of the vote count this year. Milford has been UQ’s best forward in 2015, despite being just 17 years of age. His commitment to the contest is second to none. Keep an eye on him.

Tom Overington: Eighteen games, 16 times in Sandgate’s best. Says it all really. Overington has been outstanding in the Hawks’ midfield this year, and has top shelf skills by foot. He will poll a few, especially early.

Aden Rutledge: Rutledge was exceptional this year. His biggest strength is his ability to play right across the ground, looking most dangerous in the forward line. A few niggling injuries towards the end of the year will be his biggest concern.

Cassidy Haberfield: Could be the dark horse in this year’s count. Haberfield was Surfers’ most consistent this year, playing that inside midfield role. In the games they won, Haberfield played well, which could see him with a few three-vote games in the middle of the year.

Noa Corbett: Was not only able to win his fair share of footy this year, but kicked goals as well. The last month of football was his best by far, so keep an ear out for his name to be read late in the piece.

Cal Carseldine: Hasn’t missed a beat in 2015 after missing last year through injury. His inside grunt work has been a major factor in the Magpies’ success this year. Carseldine has been able to play both inside and outside this year. Will poll well, especially early.

Luke Scott: Has been very good this year at setting the Magpies up from the back half by foot. Scott has been able to lock down on an opponent, but also play that loose man role superbly.

Steve Brittain: It’s been a bit of a niggling injury plagued 2015 for the skipper, who played 12 games during the home and away season, but the games he did play were quality. Leads from the front, wins a heap of his own footy, and in dangerous when forward.

Eric Kuret: Yet to see this guy have a bad game. Continually finds a way to get his hands on the footy at the stoppages, and feed the ball out wide. 2015 has been a terrific first year in the QAFL for Kuret.