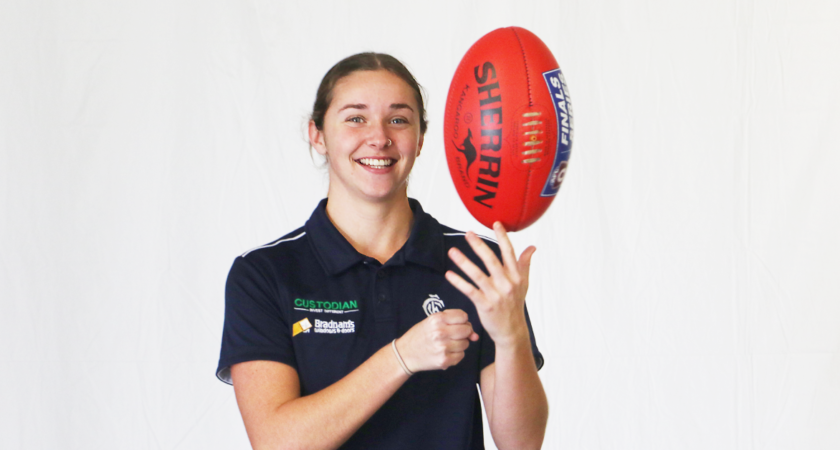 She was the first girl to play in over 100 games for her junior club, the Wynnum Vikings and at just 16-years-old, was named named in the NAB AFLW All Australian Team in 2017.

And that is part of the reason why White has chosen to once again go against the grain ahead of next week’s NAB AFLW Draft.

A mercurial talent, White will be one of many players hoping to be selected but unlike many of her Queensland contemporaries, it won’t be the sunshine state where she will call home.

White nominated for the Victorian talent pool – a far cry from her roots in Brisbane’s south eastern pocket.

The decision, while calculated, is somewhat risky with as many as eight clubs all vying for her services.

But White insists the choice to plunge herself into the unknown is a gamble worth taking.

“It’ll be a new environment. It’s a challenge in itself to live down there, live by myself but I’m excited by it and to become an adult,” White told aflq.com.au.

“It’ll better me as a person. A lot was thrown into making this decision.

“If I’m being completely honest, I won’t know where I’m going until my name gets called out. That’s very exciting in itself but also very nerve wracking.”

A lot has gone into White’s choice to ply her talents down south, but the roots of the decision can be traced back to as much as a decade ago.

White was just nine years old when she first began playing football and as soon as she started playing, she always dreamt of moving to Victoria.

“It’s always been in the back of my mind since,” White said.

“That was when I was nine years old. I just feel like this is the right time to go and I’m ready for it.”

The uncertainty of the move puts White in a precarious decision. She was one of only two players to attend the NAB AFLW Draft Combine who had nominate for a different state to the one they call home.

But if anyone is familiar with the uncertainty of football, it’s White.

Of course, just 18 months ago, White ruptured her ACL in an early season QAFLW match with Coorparoo which ruled her out for the ensuing 16 months of action.

White returned for her first full game back in July when Queensland faced Western Australia at Subiaco Oval in Round 1 of the NAB AFLW Under 18 National Championships where she finished with ten disposals, four tackles and two inside 50s.

The road back has been rough but now with even White admitting the mental game was often the most difficult part of getting back on the park.

“It’s more a mental game than anything. I remember in my first game back in Perth my head was just everywhere and I couldn’t really think straight,” she said.

“You could definitely tell what was happening when I was trying to play because I couldn’t really do much.

“My mind was thinking about my knee but I challenge myself to stay engaged and focus on what’s next.”

But as she eased back into the cycle of representative football, the confidence grew in herself.

She would go on to play four games in the Big Q in 2019 – her final season in the jersey – while also adding another six games with Coorparoo in the QAFLW where she was an integral cog in their premiership winning defence.

Now, the only box left to tick in White’s ten-year dream is to be selected in the AFLW Draft.

And while uncertainty lies ahead, after all she has been through, there may be no one better equipped for the unknown than Tarni White.

Former Queensland AFL (QAFL) grand final hero Ross Whyte had his last sporting wish granted today when he made one final visit to the hallowed turf at the... [more]

Footy in Mackay ready to kick off in 2021

AFL Mackay has unveiled the fixtures for the 2021 senior competitions, with round one to kick off on April 10.  For the first time ever, all senior clubs in... [more]