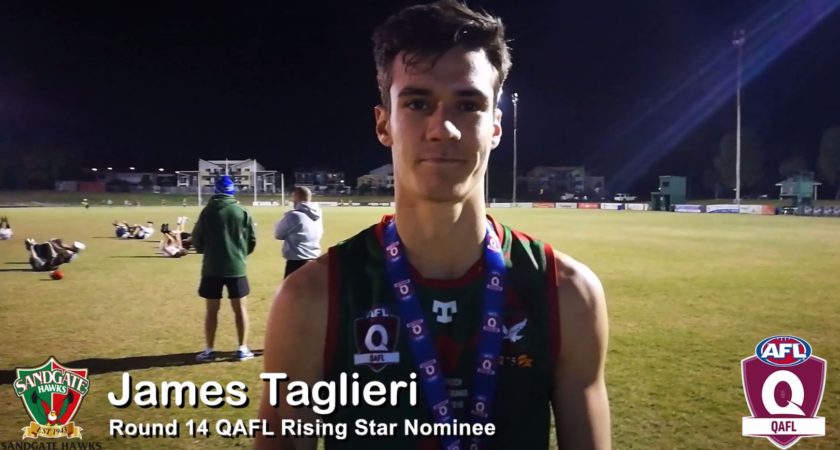 JAMES Taglieri is what the future of Sandgate is all about.

The 18-year-old is local, he can play and he would like nothing more than to see Sandgate rise to a position where they can regularly challenge for finals.

On the back of an impressive and consistent first season in senior grade, Taglieri is the QAFL Round 13 nomination for the Rising Star award.

Taglieri, 18, made his QAFL seniors debut in the first round this year and has played every game bar the one he missed when he had commitments in the afternoon.

Taglieri knows his steady form earned him his Rising Star gong but he is content knowing that he has been consistent in a team full of youngsters.

“Probably just the fact that I stayed un the senior team and missed just the one game,” Taglieri said of why he warranted the Rising Star nomination.

“I feel like I have performed well in most of my games.”

Sandgate coach Jarad Marsh says players like Taglieri are what the Hawks hope to build on evenif some of them will be lured by NEAFL clubs.

“He is in his first season of senior footy and it has been a big learning experience for him.

“As a player James has a kind of an X-factor about him, he can bob up and do something special for you.

“He is young and has a free-wheeling role and is the type of player that Sandgate can build a future on.

“And the more of those types coming through the better.”

Taglieri was born in Victoria but moved to Queensland with his parents when he was just six months old.

His dad Lino has a strong link to the northern Brisbane area, having been a strong performer for the old Windsor-Zillmere Eagles in the late 1980s and early 1990s.

He was better known as Lino Taglieri-Sclocchi although James prefers the shorter name and is registered as such.

James originally started his junior days with the Redcliffe Tigers but moved across to Sandgate as a 13-year-old.

Last season he played colts with the Hawks but is now one of a number of players from that age group now lining up with the seniors.

It has been a tough season to date, Taglieri concedes, but if and when the climb to power happens he would love to be there in some way.

“There is a three-year plan in there with the coach and hopefully we can build a team strong enough to get into the finals.

“No doubt it has been tough. When you win only one game for the year the enthusiasm drops off a bit.

“But that’s the challenge, to start anew every week and build from that.
“It is a good starting place but what we’re really lacking is probably two or three older heads to guide us more.

“My main goal is to hopefully play some NEAFL games in the coming years, although I feel there is enough young talent coming through the ranks, those who can potentially step up to the mark.”