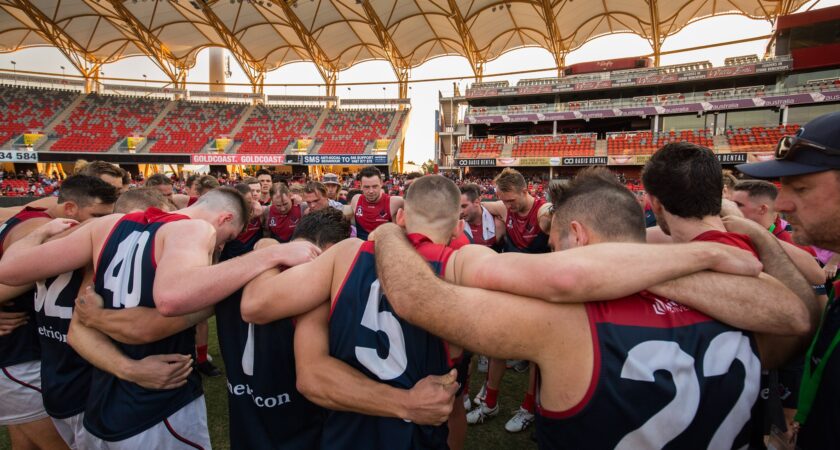 Mixing experience and youth will be the focus for the Demons in 2021 as they look to put season 2020 behind them and return to the form that saw them raise the flag in 2019.

“The team is excited. From both the coaches and players point of view, we felt a bit cheated last year as we were really looking forward to defend our 2019 title,” said Head Coach Brad Moore.

“Unfortunately, with players coming back from the NEAFL, the short season, it just didn’t work in our favour. We suffered a lot of injuries and had guys unable to play.

“But our players are back. They’ve bounced back strongly and I’m confident we’re going to see some of the form we saw in 2019.”

“We’re confident we’ve had a really strong preseason, notwithstanding the last couple of weeks with the grounds getting washed out and not being able to play practice matches,” he said.

“We’ve been able to keep our list together and consistent, with some added promising recruits who’ve bolstered our side.”

The club has lost Sam Jewell but stepping into his 6 foot 6 shoes is Nick Hay, hailing from Subiaco in Western Australia.

“Nick is a key defender and I’m really excited to have him on board. At 190 plus centimetres, he’s got a similar statue to Sam,” said Moore.

“He’s been great through the preseason. He’s super fit and is a key recruit for us.”

Also on the list of new recruits is Blake Bray, a former Carlton draftee who spent two years with the Blues.

“Blake is a key forward and another great option for our footy club,” said Moore.

“Unfortunately, he’s injured at the moment so won’t be ready until about round three or four.

“There’s also a couple of young guys we’re really excited about. Young Riley Stone joins us from the Northern Territory Thunder Academy, alongside a raft of academy boys.

“I’m quite confident they’ll have senior debuts at some point in the season. That’s important to us and a big focus for the season – blooding the young guys and mixing experience with youth.”

Brody Haberfield will take on his fifth year as Skipper and is joined by a stellar leadership group.

“There’s a real buzz in our team with the competition being two teams stronger, which means more games to play and the season being much more ‘normal’.

“All in all I think it will be a really high quality competition and an exciting one. We’re ready to get the ball rolling.”