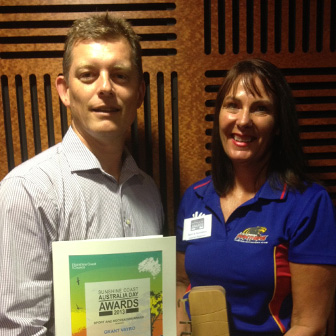 Volunteers are the life-blood of AFL clubs on the Sunshine Coast dedicating countless hours in and around work schedules, family priorities and social commitments.

At the 2013 Sunshine Coast Australia Day awards it was evident that to be a volunteer you do not have to fit any particular profile but just be willing and committed to improving the industry that you choose to donate your time to.

AFL Sunshine Coast had two nominees in the Sport and Recreation category at the awards this year that stood proudly at the awards ceremony, but both also slightly embarrassed and overwhelmed by the attention.

Grant Vayro, a passionate Nambour and Hinterland AFC committee member was honoured to be nominated but was quick to acknowledge the support from those around him at the club.

“To get a letter from the Sunshine Coast Council in the mail to say I had been nominated was a very humbling moment,” Vayro said.

“It is great to be acknowledged but there are so many people in and around club level that give so much to not only AFL but to the community.”

Volunteering at any level can be a daunting task.

The Australian Bureau of Statistics data tells us that 36 per cent of the Australian population volunteered in a survey conducted in 2010, with Queenslanders doing more than their bit in up-paid work with 38 per cent doing the ‘volunteer thing’.

Each year as individuals across the nation put their hand up to volunteer, often doing so without wanting to be acknowledged, across a variety of industries, AFL on the Sunshine Coast rely on these individuals to keep the code viable, progressive and accountable.

It is not an easy task.

“Honestly, it is tough at times when you commit to too much and find yourself inundated with emails, phone messages and text messages after taking an couple of hours away from technology to cook a family meal,” Vayro said.

The true measure of volunteers is in their acceptance of recognition the absolute sincerity of thanking others with no sign of self praise.

“When I opened the nomination I was in the car with my husband and screamed in excited so loudly that he almost crashed the car,” Hipwood said.

“Obviously we had a tough end to 2012 with the devastating fire but it was amazing to be a part of a footy club and community that rallied together so strongly.”

Leanne Hipwood was the winner- she won the Sunshine Coast Council Australia Day Award in the Sport and Recreation category and accepted with a speech that can only be described as selfless and heart-warming for the community.

“I am absolutely blown away to even have been nominated, let alone to win this award,” Hipwood said.

“Caloundra Footy Club is a great club to be involved with and it has been such an awful time over the last few months with the fire and everything that led up to it.

“To see our Club and surrounding community give so much at a time in need is something that I was proud to be a part of and it is just fantastic that the clubhouse has been rebuilt and everything is almost back to normal.”

Choking back tears Hipwood then thanked the Caloundra AFC committee for all of their efforts.

A lady who just won a prestigious award acknowledging everyone and everything in her speech and did not once mention the hours, lack of sleep and frustrating moments that she encountered along the volunteer journey.

As the 2013 AFL season is well into action with recruitment, sign-on and, of course, NAB Cup action back on the TV, our volunteers are going about their business and doing their best, not for their selves but for their community clubs.

Congratulations to Leanne Hipwood in her achievement, Grant Vayro for his nomination and every other volunteer that makes AFL on the Sunshine Coast possible.

Moorooka AFC gets kids active
Merrett a Lion for life