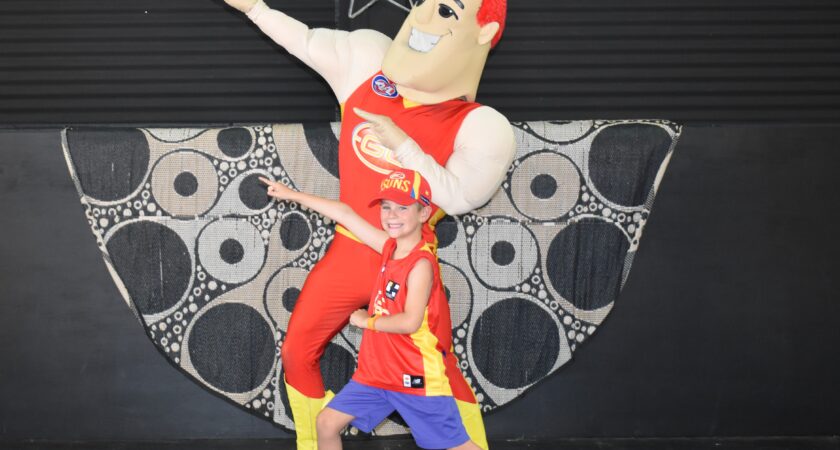 The visit was part of the AAMI Community Camps, which in 2021 will see all 18 AFL Clubs connect with members and fans throughout their dedicated regions via video sessions and phone calls with local school students, community football volunteers and NAB AFL Auskick and junior football participants.

For Finn, it was a school assembly he’ll never forget, with Jarrod appearing on the big screen and leaving the year two student speechless!

“Our fans are one of the most important parts of our game,” said Witts.

“For us as players, to be able to give back, even in the smallest way, is extremely rewarding.

“To see Finn’s support for the SUNS, to see him training in the red and gold and waving our flag in Central Queensland is incredible and on behalf of the club I wanted him to know that we do appreciate it.

“Our reach as a club, throughout the Gold Coast, Northern NSW, Central and North Queensland and even into Darwin in the Northern Territory is extremely important to the AFL as an industry and it’s part of our role to make sure that the sport continues to thrive throughout those regions.

“The AAMI Community Camps play a huge role in that and although it looks slightly different in 2021, we’re confident we can still inspire the next generation of footy players.”

Finn, who’s in his second year of Auskick, wears his full Gold Coast SUNS kit to all sessions but his parents say his love and obsession with Aussie rules extends far beyond just the red and gold.

“He got really excited about football when we did a roadtrip to the Gold Coast last year to see the SUNS take on the (Fremantle) Dockers,” said Mum, Narree Carton.

“Finn knows the words to every club song, all 18. And is obsessed with his footy cards, and the stats and details of the all the teams. He knows which players play at which number and has his own predictions about what teams will do well this year.”

“When he grows up, he wants to be a ruckman, but he’s pretty short so I’m not so sure of that! I actually think he’d make a great commentator because he knows everything about the sport and he never stops talking!”

Established in 2003, the AFL’s Community Camps program have reached more than 1.5 million school students across 7,500 schools and over 48,500 people in aged care facilities and hospital.

AFL Executive General Manager of Customer and Commercial, Kylie Rogers said it was fantastic for the game to have Australia’s number one insurer for home, motor, and business expand its partnership with the AFL.

“While we have faced huge challenges as an industry over the past 12 months and were not able to take players out into communities this year, we have found a way to deliver the AAMI Community Camps to continue to strengthen the connection between our elite clubs and the wider community,” she said.

“The AAMI Community Camps provide the perfect platform for communities and individuals across the country, no matter where they live, to get closer to the players and the game.”