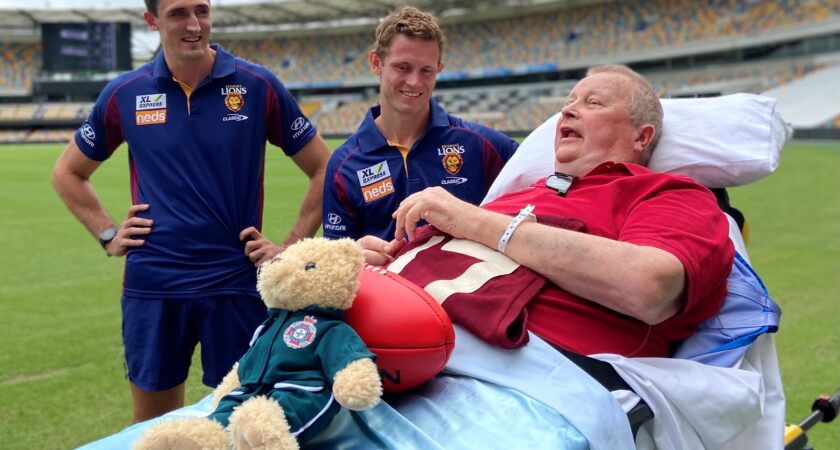 Former Queensland AFL (QAFL) grand final hero Ross Whyte had his last sporting wish granted today when he made one final visit to the hallowed turf at the Gabba – the scene of his 1977 grand final heroics – surrounded by family, friends and Brisbane Lions players.

The team from Ambulance Wish Queensland – a program of Palliative Care Queensland (PCQ) supported by Queensland Health and Queensland Ambulance Service (QAS) – took Ross, who has a terminal condition, to the Gabba to fulfil his last wish and help to create memories forever for family and friends.

Most significantly, it was a return to the field of dreams from 44 years ago where, as a 21 year old ruckman playing in his first QAFL grand final, Ross became an instant footy legend. Today he reminisced about kicking the winning goal for his beloved Western Districts Club to win the QAFL flag.

Ross is under the care of St Vincent’s Hospital Brisbane palliative care team, after being diagnosed with prostate cancer in 2017 which later metastisised. He now has spinal cord compression which has resulted in him being unable to walk. Therefore the only way to fulfil his last wish to revisit his glory days at the Gabba is with Ambulance Wish Queensland.

He was all smiles as he was stretchered onto the edge of the Gabba turf by his Ambulance Wish team (with volunteer Queensland Ambulance Service paramedics) and was introduced to the Lions players. Ross later cried tears of joy as he watched the final exciting and frenetic minutes of the 1977 grand final being replayed on the big screen, including his winning goal, all to the cheers of family, friends and assembled media.

Ross’ family even brought his original grand final Western Districts Number 17 jumper for him to wave and hold for the cameras!

“The (old) Gabba has such special memories for me winning two grand finals (1977 and 1978) and it doesn’t get much better than kicking the winning goal as a young 21 year old,” said Ross.

“It was a see-sawing game with the lead changing many times (11 times in total) and we were down by one point with a minute to go and thankfully for us, the ball came my way. I took a contested mark, lined it up from about 30 metres out and on an angle and thankfully my kick was straight and true and it sailed through the posts.

“It was my 21st birthday the day before the final and I hadn’t really celebrated it, so it made the double celebrations after the match even sweeter.”

“When people come to the end of their life, wishes are often simple and it’s often about what matters most or what memory they would like to recreate,” said Ms Mills.

“Ross’ wish today is a great example of this. It has been special for him to return to the Gabba which was obviously a truly memorable place for him back in his early playing days.

“An additional benefit of this program is the joy it brings to others, the smiles on our volunteers’, paramedics’ and nurses’ faces, the Lions and Gabba staff and the Health Minister today. Life is precious and it’s moments like these that bring so much joy. That is also a big part of the program.”

Brisbane Lions ruckman Oscar McInerney said it was a privilege to meet Ross and his family.

“It was really great to meet Ross and to hear his stories of his footy back in the 70s,’’ he said.

“To kick the winning goal in a premiership victory is something every footballer dreams of and I was hanging on every word from him and his family when they told us about the ‘77 Grand Final. It is really special that Ambulance Wish Queensland helped Ross get back to the Gabba one last time and I hope we were able to help in some way to make the day special for him.’’

For every Ambulance Wish, the team produces three memory items:
• Wish Bear
• Wish Blanket
• Folder full of memories (including a photo book and USB of the photos)

However, the program requires corporate partnerships, donations, philanthropists and community fundraising to ensure its continued operation and ability to deliver as many wishes as possible for Queenslanders approaching their end of life.