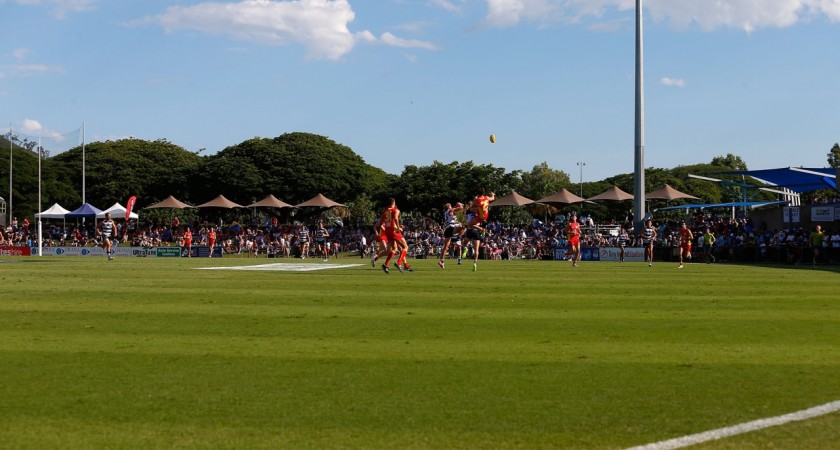 The Gold Coast SUNS are proud to announce that it will hold a Toyota AFL Premiership match in Cairns in early 2018.

The game forms part of a part of a deal announced today by Tourism and Major Events Minister Kate Jones.

Ms Jones said the deal, which was struck by Tourism and Events Queensland, would see the Gold Coast SUNS play for premiership points for the eighth straight season in Cairns in 2018 and for the first time in Townsville in 2019 or 2020.

“Bringing the Gold Coast SUNS up north is a big win for Queensland and it will be great to see Townsville hosting a premiership AFL game for the first time,” she said.

“Cairns and Townsville have an extremely strong AFL fan base and these games will help the code expand its reach in Queensland and give lovers of Aussie rules the chance to experience live AFL action in north Queensland.

“I am confident that these premiership games will attract sell-out crowds.”

“Securing these matches gives fans another reason to experience two of our most iconic destinations,” she said.

“This boost to visitor numbers will have a great impact on the local economy.

Gold Coast SUNS Chairman Tony Cochrane said the club was delighted to be deepening its connection with North Queensland.

“We know North Queensland fans are passionate about AFL, and with the support of both the AFL and Tourism and Events Queensland, we are thrilled they will see the team play first hand in a series of matches in the region,” Mr Cochrane said.

“As a club we have established significant support in Cairns and Townsville and enjoy playing our role in developing Australian Football throughout the region, which is also a key recruitment catchment for the Gold Coast SUNS Talent Academy.

“In the past, through community camps, pre-season games and AFL premiership fixtures, the Gold Coast SUNS has and will continue to support the growth of AFL in North Queensland.”

Minister Assisting the Premier on North Queensland Coralee O’Rourke said a deal securing the AFL’s presence for the next two years was a great win for the region.

“One thing I know for sure is that North Queenslanders love their sport, and over the last few years we have seen the AFL increase its following in Cairns and Townsville,” Mrs O’Rourke said.

“To have a Queensland-based team play home games here is a great outcome and shows the Palaszczuk Government’s commitment to stimulating events tourism in north Queensland.”

Cairns Mayor Bob Manning said AFL had become a much-loved and anticipated fixture on the sporting calendar for the region, and Cairns welcomed the return of the Gold Coast Suns in 2018.

“We are so pleased to have top-level AFL once again visit our city. Each time these sports come to Far North Queensland a new legion of fans are engaged and our local kids are inspired to strive for greatness,” Cr Manning said.

“Matches such as this provide an opportunity for the community to see their sporting heroes up close and it will be a wonderful experience for local fans. This match will also bring an influx of die-hard AFL fans from the southern states, all keen to escape the onset of winter, which will be a fantastic boost to our local economy.”

Townsville Mayor Jenny Hill said this announcement was a big win for the city.

“Today’s announcement is a vote of confidence in Townsville and will further raise the city’s sporting profile, and create new job opportunities in tourism and hospitality,” Cr Hill said.

“In Townsville we already have an impressive track record for our capacity to stage big events and this will be another great offering for the city and the North Queensland region.

“We have the Cowboys, the Fire, V8s, next year we will have the Commonwealth Games, and the Gold Coast Suns AFL Game will add to the breadth of our national sporting events.

“There is no doubt we can package our tourism products around this national sporting event that will appeal to all visitors for the match.”

The 2018 JLT Community Series, the AFL’s pre-season matches, and Toyota AFL Premiership Season fixture details will be released in the coming weeks.

Details of how to purchase tickets to these matches will be promoted in early 2018 onAFL.com.au  and goldcoastfc.com.au