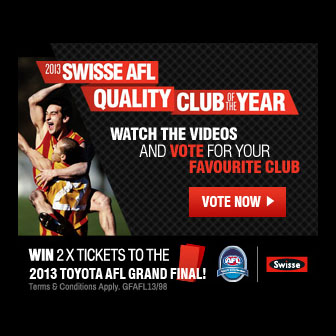 Northern Rivers Storm has been named as a finalist in the 2013 Swisse Quality Club of the Year Competition.

Clubs with either a Gold, Silver of Bronze level of accreditation were asked to send in a short video depicting their club and what it made so great.

After a huge amount of entries from football clubs all around Australia, the 10 finalists were chosen with the overall winner to be decided by public vote.

So get online and vote for the Storm today!

• Watch the videos and vote for Northern Rivers Storm.

The fantastic entries give a good insight in to the passion of players, coaches and supporters at community clubs.

Those who place a vote go in the running to win 2 tickets to the 2013 Toyota AFL Grand Final.