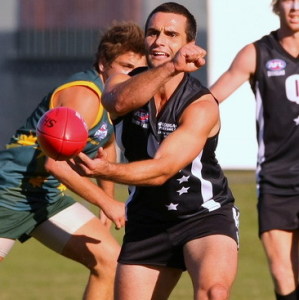 A faultless second half lifted the Queensland Country Stockmen to a drought-ending victory over Cairns in the representative clash at Coorparoo on Saturday.

A faultless second half lifted the Queensland Country Stockmen to a drought-ending victory over Cairns in the representative clash at Coorparoo on Saturday.
A tight, even struggle up to half-time belied what was to come after the big break when the Stockmen turned on some high quality football that the visitors  simply could not match.
Ahead 5.5 to 4.6 at half-time, the Stockmen lifted significantly to run away with the match by 19.6 (120) to 10.10 (70).
As those numbers indicate, the second half haul of 14.1 to 3.2 told the sorry tale for the northerners, who tasted defeat for the first time in the past four clashes between the sides.
“To kick that many (14.1) in the second half was just fantastic football,” said Stockmen coach Brett Maloney after his successful representative debut.
“That solid scoreboard pressure (eight goals straight) was just superb.”
Maloney and his back-up panel pulled off a couple of positional switches that certainly had a profound effect on proceedings after a close first half.
Josh Norman, from QAFL division one club Redlands (formerly from the Sunshine Coast) provided one spark when moved from centre half-back to centre half-forward.
Another came from the move of Noosa’s tireless Jay Reynolds from on-ball to half-forward flank duties.
And giving Palm Beach-Currumbin’s on-baller more room to move on a wing after the big break also turned up trumps for the Stockmen as they turned on some champagne football.
“It was pretty hot in close early and I told the boys at half-time that the game would open up,” said Maloney.
“I asked them to stick to their guns and keep working to our plan. They did.
“It was a great game. I spoke to a few people afterwards and they said it was as good and competitive a representative game they’d seen for a while.”
That was, until the Stockmen lassoed their rivals.
“We had been breaking down across the half-forward line,” explained Maloney of the positional rejigging he did.
“We had been getting plenty of the footy but it wasn’t deep enough to score.”
The third term produced 8.0 to 3.2 the Stockmen’s way, then they capped that effort off with a final quarter of 6.1 to 3.2.
“The endeavour was there but the polish wasn’t,” said beaten Cairns coach Mark Kennedy, referring to the availability of several players from QAFL division one in the Stockmen line-up.
“We were pretty competitive early, but in the second we started fumbling and we didn’t take our chances. We lost our momentum then and it continued for the rest of the game.”
Yet despite this, champion full-forward Matt Walsh, the three times century goalkicker from Cairns Saints, still finished with six majors as he again enhanced his reputation as the best forward in country football.
He certainly did his part, as did Kane Richter from North Cairns Tigers. Richter did enough to be named winner of the Wayne Jackson Medal which goes to the best Cairns player.
Former Zillmere defender Luke Ehlich (Manunda Hawks), half-back flanker Evan Hocking (Port Douglas) and Luke Powell (Manunda Hawks) were others who worked hard to keep the northern flag flying.
The Stockmen had plenty of winners on the day, particularly Noosa’s classy midfielder Luke Matthews and former Peel Thunder (WAFL) ruckman Brendan Page.
Page was especially dominant and was subsequently named Ron Davidson Medal winner for the Stockmen’s best. Not bad for a player who was not named in the original squad.
Nor was his Noosa teammate Jay Reynolds, who took his rep chance with both hands.
Also turning in stellar performances were Blake Passfield (Redland) in a forward pocket and on-ball, Bloom when switched to a wing, and Mayne’s evergreen key position utility Caleb Brown.