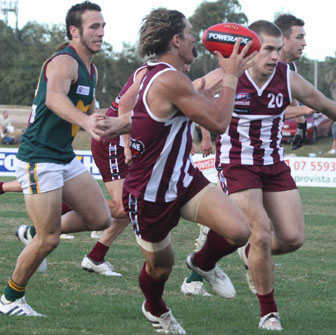 The three Northern Territory Thunder representatives in the Queensland side made strong contributions against Tasmania on Saturday, and each was delighted to be there.

The three Northern Territory Thunder representatives in the Queensland side made strong contributions against Tasmania on Saturday, and each was delighted to be there.

Cameron Ilett was a key part of the midfield set-up, Kenrick Tyrrell was outstanding in the ruck, and Shaun Tapp pinch-hit well in the ruck and helped out in defence when required.

Ilett, who has won League medals in both his home competition the NTFL and in Canberra, admitted wearing another State’s colours felt different, although it certainly didn’t affect his passion for the ball.

“It was a little strange at the start,” he said. “I mentioned it to ‘KT” that having the maroon and white on instead of the black, ochre and white felt strange, but it was a good opportunity and I really enjoyed it.

“I’m definitely glad for the experience. When chances like this come around you’ve got to grab it with both hands.”

He had no doubt that a strong contribution by every player was the major factor in the 79-point win at Fankhauser Reserve.

“The key was that all 23 had a go and it makes a difference when all 23 play well,” Ilett said.

Tyrrell leapt high over his opponents all day and gave an armchair ride to his midfielders.

“I was stoked actually, to be selected,” he said. “ I know it’s a big honour for all the boys from Queensland.

“I didn’t do it all my myself – Tappy was in there and a few of the other boys, so it was good.”

Tyrrell said the Queenslanders never took their foot of the pedal once they started to gain the ascendancy in the second quarter.

“We were quietly confident at halftime but we knew the job wasn’t done,” he said. “We had a big third quarter and then smashed them in the end.”

The big man loves his football and won’t have any problems adjusting back to State League level when the Thunder visit Dittmer Park for a crucial clash with Mt Gravatt on Saturday.

“I’m up for it every week, so I look forward to it and enjoy it,” he said.

The only downside to the day was a hip injury to Tapp, who was hurt by an errant knee from Maroons teammate Ben Merrett late in the day.