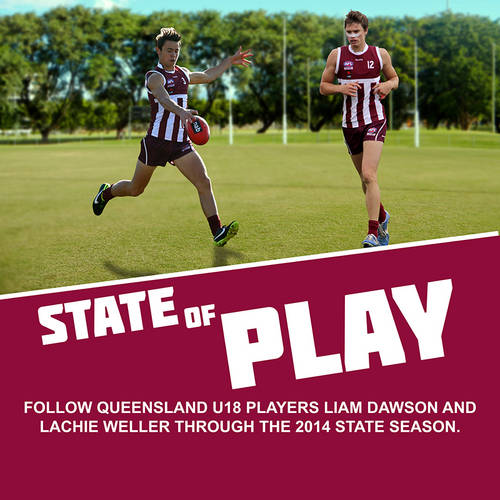 Queensland u18 representative, Liam Dawson, gives us his insights into the 2014 rep season.

With U18 nationals just around the corner, we had our jumper presentation this week, which was a really good chance to catch up with and meet some new people.

I’ve been to a few presentations the last few years and coming towards the back end of the season, it’s always nice to hang out with a few people you haven’t seen in a while and coaches and all that.

You meet a lot of people along the way, being in the state program and generally everyone’s really nice and you can learn a lot off everyone, it’s great.

It’s a bit daunting sometimes, people kind of know who you are before you meet them, and they’re excited to meet you and I feel like it’s only Liam Dawson.

I went back to my old club the other day, the Redcliffe Tigers, and a lot of people came up to me there, and gave me advice and all that.

You do get used to that sort of thing, and that helps when you speak to recruiters, who you haven’t necessarily met before.

Before this year, I hadn’t spoken to any clubs, so it’s all been a bit of a unknown.

I met with a couple of clubs earlier in the year, through the AIS Academy and recruiters keep in touch with you through the season.

At the moment, I would probably talk to a recruiter once a week and texting them on and off, it’s pretty strange, that feeling of ‘wow, people want to talk to me’, but it’s a good experience to be part of.

I don’t know how they get my number but they’ll just give me a call and say ‘I’m so and so from this club’ and they’ll ask me about myself and some of the other state guys, if I know them well.

I get a bit nervous talking to them sometimes, because you’re trying to sell yourself to them and it’s a bit bizarre sometimes, texting them, it’s like what do I say –hey mate?, no, can’t say that, but you do get used to it.

Often it’s just a general kind of chat, they’ll ask about school, work and what you’re up to.

The best thing is to tell the truth, lies always come back to bite you, which is basically how I am in life generally.

As the season goes on, the draft has crossed my mind a little bit and you wonder where you fit or if you’re going to be picked up.

I do read some of the stuff out there about the draft, but some of it’s pretty outrageous and I don’t’ really take much notice.

The coaches are the people I pay attention to – I listen to what Fletch, Scotty Borlace and all the guys say about where my footy’s at and what I’ve got to do.

I’ve been looking forward to nationals since last September, it’s the time where all the training you’ve done has to pay off.

It’s a bit more nerve-wracking this year because I feel like I’ve got a bigger role to play being one of the older guys, but I’m not going to put too much pressure on myself.

I just need to play footy, that’s why we’re here, and we’ve got people who can really help us.

The AIS, Lions Academy and the state program have been invaluable for my development as a person and a footballer and I have so much to be grateful to them for.

I probably wouldn’t be in this position if it weren’t for them.