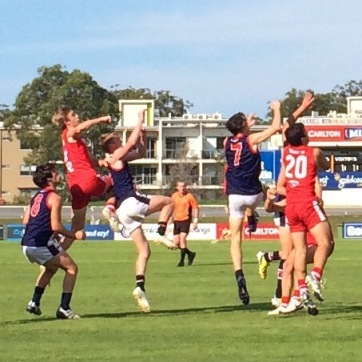 Queensland’s foray into interstate school competition via the School Sport Victoria Premier League has been heralded a success.

Neil Mackay, head of the AFL Academy at PBC, said they went into the competition hoping the players would gain a wealth of experience and knowledge about where they need to aim should they one day hope to play at the highest level.

“The benefits we were after was for them to find out the higher level of play required – the higher work rates required, the skill work and, most importantly, the concentration – the mental side of the game,” he said.

“We were working really hard with our group on what they are doing when they don’t have the ball. That’s an area I think Queensland needs to really work on.”

The Melbourne team described the immaculate Southport deck as “good as or better than the MCG”, a fantastic compliment for the Sharks.

A typical Gold Coast autumn day greeted the Victorians with 27 degrees and sunshine, providing an idyllic setting for the Round 3 fixture.

With one win and one loss going in to the game, the home side put on an impressive performance, giving their small crowd of supporters plenty to cheer about.

From the first siren the pace was fast, ball movement quick, and the boys ran full throttle; Bailey Fraser kicked the first goal of the game, giving PBC the start they needed.

The match turned into a shootout in the second quarter – a thrilling display of school footy. At half time, the Reds trailed their interstate visitors by just five points.

The warm temperatures didn’t seem to affect Hallam, who took control of the match in the last quarter.

With a few key players missing due to injury and state commitments, PBC ran out of legs. Hallam capitalised, and came out victorious, winning 11.8.74 to 6.7.43.

Standouts for the home side were Ethan Reeves and Jesse Joyce, while Jason Lee proved a reliable target up forward in his first match back from injury.

Young Brayden Crossley, fresh from the U15 State Schoolboys Championships, chipped in with two goals of his own, a remarkable effort against 17 and 18-year-old opposition.

Despite their comparatively young team, Mackay was always positive about the boys’ prospects.

“Players were chosen on their ability. We’ve got a lot of good, young players coming through,” he said.

“We had a couple of boys across all three games who really stood up to the level and adjusted well.

“Max Spencer, our centre-half-back, performed well in all three games and looked at home. Luke Dula did the same sort of thing. And Joel Smith – as a forward – only played two of the games, but he beat his man.”

For Hallam, Liam Myatt (4) and Wyatt Hansen (3) repeatedly provided opportunities up the front, kicking seven goals between them. Brad Homfray, Caleb Millman and Jarryd Tait were also among the best for the visitors.

But the visit to Queensland wasn’t just about the game for Hallam.

The Victorians visited the Gold Coast Suns, touring Metricon Stadium and the Suns’ training facility, gaining a great insight into the inner workings of an AFL club with a comparatively shorter history to the Melbourne teams.

Players and officials for both teams also gathered for a team dinner following the match, providing a great opportunity for the boys to unwind and mix with their interstate counterparts, learn more about each other’s football experiences and form new friendships.

Hallam were able to participate in a somewhat more enjoyable recovery than they’re used to in the cooler southern climate, taking advantage of the Gold Coast’s beaches before their flight back to Melbourne.

Hallam will now progress to the SSV Premier League semi-finals later this month, while PBC go on to the Queensland Schools of Excellence Cup semi-finals in mid-July.

Mackay hopes to see PBC back in the Premier League next year.

“Our minimum thing is that we hope that the invite for whichever team wins the Queensland competition is extended again next year to join the Victorian school competition,” he said.

“With my rosy glasses on, hopefully we take another step towards the Premier League next year.”