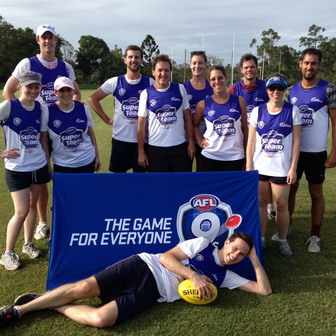 When AFL Queensland put the call out for 10 Cadbury AFL 9s players brave enough to take on the might of the Brisbane Lions Coaches at the their Yeronga Family Fun Day, we didn’t know what to expect …

Enter the Spiderpigs! A gang of adventurous and heroic 9s players from Brisbane’s Western Suburbs, David to the Lions’ Goliath line-up of household AFL names like Shane Woewodin, Gary O’Donnell and Murray Davis.

Led by captain Chris Keane – with support from 6’8” utility ‘Ant’ – the Spiderpigs were nervous early on, allowing the Lions to score first blood.

And while the plucky Spideys soon settled into the game and showed plenty of fight, they headed into the main break trailing 3.1(19) to 1.1(7)

After a rousing half-time speech from Chris, the Spiderpigs were able to make up ground quickly on a Lions team that were perhaps showing their age? Their slow start to the second half was compounded by their surprising decision to let team captain Gary O’Donnell to warm the bench.

This move proved to be costly, with the Spiderpigs midfield enforcer Anne-Louise collecting possessions at will without the attention of O’Donnell.

Utilising the running power of Peter ‘Killer’ Kilroy, the pair were able to control the midfield and take advantage of Ant’s marking prowess to level the scores with 5-minutes to go.

The Lions team regained their poise with Woewodin rebounding out of the backline and linking with tall timber Murray Davis through the middle on numerous occasions.

After fighting so hard to level the scores the Spiderpigs appeared to run out of steam late in the game, with Lions young gun Blade able to take control and provide his forwards with a number of scoring opportunities.

It’s with a very heavy heart that AFL Queensland confirms the 2021 Byron Bay AFL9s Invitational has been cancelled. We have made the difficult decision... [more]