Spackman to ton up for Morningside

Spackman to ton up for Morningside 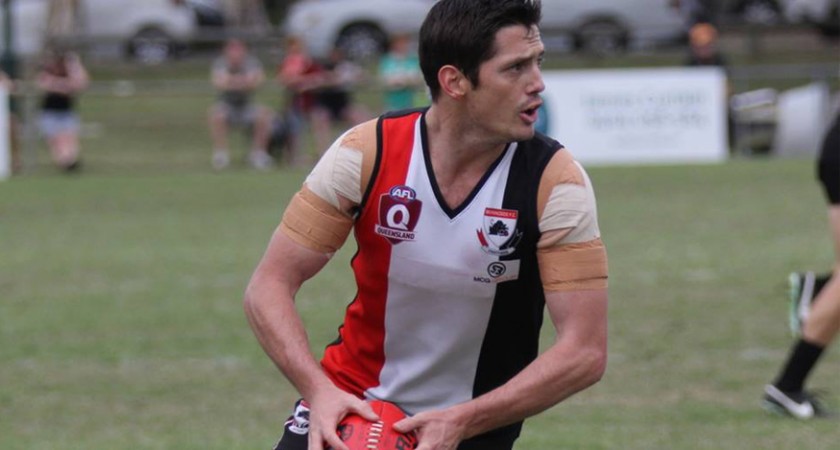 This Saturday, Adam Spackman will notch up senior game 100 for the Morningside Football Club, but his story goes so much deeper than that.

Spackman was rookie listed at the Brisbane Lions, has been one of Morningside’s best over the last decade, won a senior premiership last year, and was awarded the Zane Taylor medal for best on ground in Queensland’s game against Vic Metro earlier this year.

Before we get into that, lets take you back to where it all began.

Footy always played a part in his life, his grandfather played for Geelong, and he had family in Melbourne, but growing up in Queensland meant his younger days were filled by cricket and rugby league.

At age 12, at the Hervey Bay Football Club, Spackman played his first game of Australian rules.

Since that day, Spackman has never looked back.

At 16, he was offered a scholarship to St Peters Lutheran College in Indooroopilly, which went moving away from home.

“I moved down in grade 12, it was an athletic scholarship, but I pretty much just played footy,” Spackman said.

That’s where his Morningside story began.

“One of my mates I went to school with, Ryan Holman, Ryan’s old man Mark Holman knew that Morningside were a good club and got me along down there. I’d actually never heard of the Morningside footy club before I rocked up to training,” he said.

Morningside instantly knew they had something special amongst the ranks.

Two weeks before his 17th birthday, Spackman played his first senior game in the red white and black.

“We played down at Carrara it and we actually beat Southport that day. There was always a pretty big rivalry between Morningside and Southport, I had to tag David James on the far wing, so I remember it pretty well,” he said.

“I got a bit of it, I was just trying to play my role to be honest and try and get a kick.

“It was a good experience and obviously I didn’t really understand the culture or the rivalry around Southport, so it was good to kick off my career in that culture and that relationship.”

After making waves as a youngster, Spackman was drafter to the Brisbane Lions with pick #66 in the 2008 National Rookie Draft.

While at the Lions, he tore ligaments in his ankle, and suffered from niggling injuries in his quads and hamstrings, meaning he was never given the opportunity to have a clean run at it.

When his time at the Lions ended, there was only one place he wanted to go back to.

“It was a pretty easy decision, I’d thought about maybe potentially playing somewhere else or going down south and playing, but at the end of the day you play footy because you want to play with your mates,” Spackman said.

To put it simply, Morningside is home.

Across his 99 games, there is one highlight that stands head and shoulders above the rest.

“Winning last year’s flag, that was pretty special,” he said.

After missing two premierships while at the Lions, and playing in two losing grand finals, it nearly wasn’t to be again.

“Last year was really good but I nearly didn’t make it. I dislocated my shoulder the week before the final, so I was pretty lucky to get through it,” Spackman said.

It’s not just Morningside where Spackman has shown his footballing prowess, he has pulled on the Q jumper on three separate occasions, including a best on ground performance against Vic Metro this year.

“I love rep footy, I’ve always been a big one that you should represent your state when the opportunity comes and I really enjoy the program,’ he said.

“I always like playing rep footy against good opposition to test yourself and see where you are. If they opportunity comes up I’ll always take it.”

The only sour note over his career is the injury problems, which have included a couple of major shoulder reconstructions.

It did cross his mind, and no one would have blamed him, but regardless of the setbacks, he couldn’t walk away from football.

“It would be easy to walk away, but I think I would miss out on a lot. You know what they say; “the easy option is not always the best option,” he said.

Still young, Spackman hopes he still has a lot of good football ahead of him.

“I’m only 26, I’ve had some shocking injuries that have pushed me back a bit, but I’ve still got a bit of footy left in me.

“Hopefully a couple more years, you’re a long time retired so might as well take advantage of it while I can.”

If this year is anything to go by, Spackman will be a star of the competition for a long time to come.