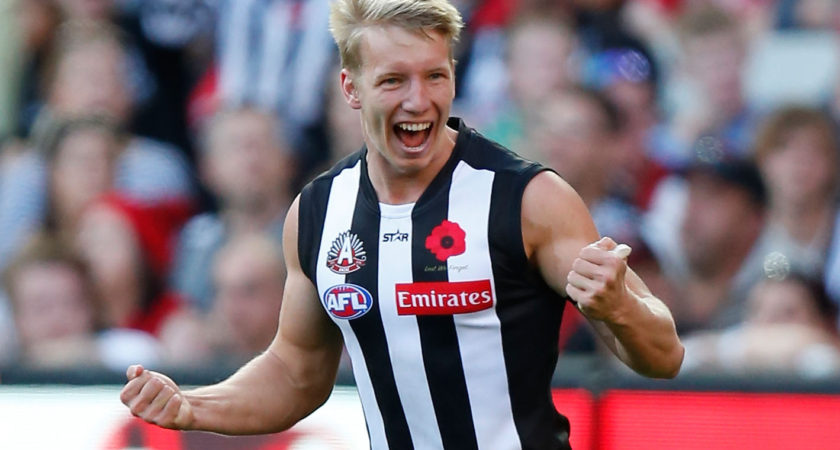 Six months after being delisted by 2018 runners-up Collingwood, Smith is set to begin phase two of his career with premiers West Coast.

The 25-year-old Toowoomba product, thrown a career lifeline by the Eagles in the Rookie Draft last November, will play for West Coast against GWS at Optus Stadium in Perth on Saturday night.

Oddly, he will be on hand to celebrate the Eagles’ unfurling of the 2018 premiership flag which six months ago, as a then Collingwood player, he was desperately hoping they would not win.

Smith, in Brisbane last weekend as first emergency for an Eagles side soundly beaten by Brisbane at the Gabba, was included last night with champion full forward Josh Kennedy as coach Adam Simpson made two changes in the wake of the upset loss.

Smith will become the sixth player to wear jumper #45 for the Eagles since they joined the AFL with the then Brisbane Bears in 1987.

Smith finds himself in a position most would have thought impossible when last year he was dropped from the Collingwood side after playing Round 1 and never given another chance before being shown the door by coach Nathan Buckley.

He was the last player onto the 2019 West Coast playing list when chosen at #31 in the Rookie Draft but has quickly worked his way up the pecking order.

On his first official day at the club he won the time trial and has impressed Eagles staff with the ultra-professional way he goes about his football, and the variety of attributes he offers.

Although signed on a standard one-year rookie contract, Eagles insiders say they are thinking he has the capacity to be a long-term member of the star-studded group.

Smith’s debut for the Eagles comes three weeks short of three years after his debut for Collingwood in the 2016 Anzac Day game in front of a crowd of 85,082 against Essendon at the MCG, when he had 23 possessions and a goal in a 69-point Magpies win.

It was famously described at the time by coach Buckley as “the day Collingwood debuted a Texan and a Queenslander,” with giant American Mason Cox, now a star of the competition, also getting his first taste of the AFL.

The similarities in the circumstances for Smith are strikingly similar this time again.

The then 22-year-old, born in Rockhampton, raised in Toowoomba, schooled at Downlands College and a football graduate of Toowoomba University, Morningside and Redland had been overlooked by every AFL club in four consecutive national drafts from his Under 18 year.

He was eventually taken by Collingwood with selection #25 in the 2015 Rookie Draft and, just as he has done this time, was an immediate hit.

He would have debuted in Round 1 but for injury, and from his Round 5 debut he played every game of his first season. Despite missing four games he finished 7thin the Collingwood B&F and was judged club’s best first year player after averaging 20.8 disposals a game.

It would have been easy for him to pack up and return home to Queensland, but that’s not Smith.

Instead, he has drawn on a burning drive to succeed which goes all the way back to his late father Alan, who made a Victorian amateur football squad in his 20’s and also played district cricket, tennis and basketball.

It was Alan who got Josh into football as a six-year-old in Toowoomba after the family had moved from Rockhampton, where he was born, and, according to a Queensland Scorpions player profile in 2012, was the biggest influence on his career.

“He (his father) always had belief in me, and always helped me when I needed it,” Josh wrote at the time.

In the same questionnaire the long-time Geelong supporter nominated Cats skipper Joel Selwood as his football hero and Brisbane champion Simon Black as his most admired player.

And, interestingly, when asked why an AFL club should draft him, Smith had replied: “Because I would have the highest work ethic and I would push myself to become an elite player.”