Sherwood’s Samson Ryan to make his AFL debut for Richmond 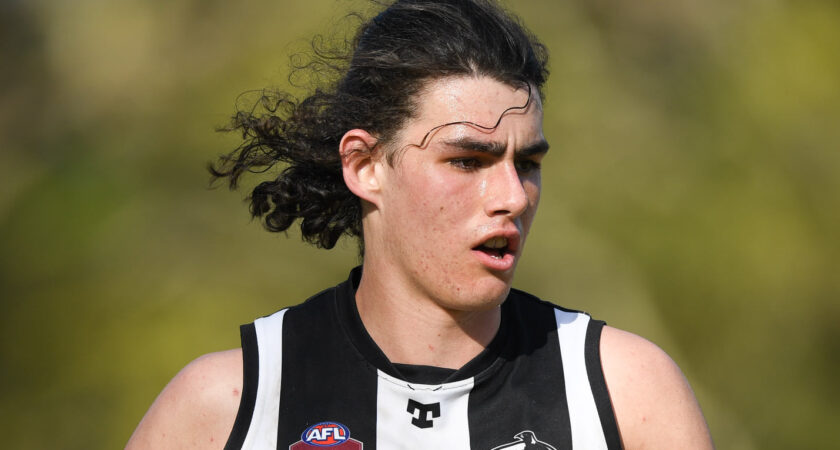 Four years ago Samson Ryan moved to Toowoomba to play cricket, perhaps dreaming of one day playing for Australia in the Boxing Day Test at the MCG.

Tonight he will be at the MCG, but there will be no cricket bat in sight. It will be all about football and the #32 Richmond jumper he will wear in a fairytale AFL debut.

Samson, a graduate of the Brisbane Lions Academy drafted by the Tigers from Sherwood with selection #40 in last year’s AFL National Draft, will debut against StKilda on the big stage of Friday night football.

He will be the second Queensland debutant of the season after Richmond teammate Will Martyn had his first taste of League football in Round 4 and will complete an extraordinary journey from Merimbula on the south coast of NSW.

While Martyn, always a standout Queensland junior and Samson’s captain at the Lions Academy, had followed a traditional path to the AFL Ryan could hardly have been more different.

He was first a cricketer. And not the intimidating fast bowler that his 206cm frame might suggest but an opening bat. So, too, was younger brother Jem, and when the pair both received scholarships to play cricket at Toowoomba Grammar School in 2016 the family moved to Queensland.

Football was a secondary option, but quickly it jumped the queue.

“We hadn’t been there (Toowoomba) too long, and cricket had just finished up, so Dad and I went to the local footy. We sat down and this guy asked if I wanted a game in the 16s,” Ryan recounts.

He responded, “why not” and quickly he rediscovered his love of football.

It wasn’t foreign to him. He’d played as a youngster at Merimbula and was a third-generation Richmond fan who always followed the AFL with Father Luke, an ardent Tigers man.

Samson and Jem went on to win positions in the Lions Academy. And the rest, as they say, is history.

Overnight Luke and wife Belinda become drivers, making the trek up and down the Warrego Highway to Brisbane more times than they might care to remember to further the boys’ football dream.

Luke played for Queensland at U17 and U19 level and represented the Allies at the national carnival, and when he couldn’t get a regular game as a top-up player with the Lions Reserves in the NEAFL in 2019 he was recruited by Redland.

“He’d shown some real potential but he needed to play at the best level he could so we committed to play him for the last seven games of the season,” King recalled today.

Ryan played primarily as a forward/ruck behind the Bombers’ No.1 ruckman Craig Malone, who was a NEAFL Team of the Year choice and a short-term impediment to the ambitions of his highly driven and focussed understudy.

So, leading into the 2020 AFL season, Ryan made the difficult decision to leave home and play with the Canberra Demons, who were also a part of the expanded NEAFL at the time. The No.1 ruck spot was his for the taking.

“We were sad to see him go but he knew what he wanted and he knew where he wanted to go. He just never gave up. He was just trying to find a path to get there, and understandably he decided to go where he would play each week in the ruck,” King said.

And then Covid hit. The NEAFL season shut down, Ryan returned home and signed to play with Sherwood in a QAFL competition strengthened significantly by a lot of ex-NEAFL players chasing a game.

As the season wore on he caught the attention of several AFL recruiting scouts, and the prospect of a rookie spot at a League club grew.

He turned 20 on the day of the AFL draft, 9 December, and sat down on the couch at home with his father to watch as Jamarra Ugle-Hagan went to the Bulldogs at #1, followed by Riley Thilthorpe to Adelaide at #2 and Will Phillips to North Melbourne at #3.

Ryan was more focussed on the rookie draft that would follow the next day, but he watched intently as his peers from around the country lived a life-time dream to join an AFL club.

Morningside’s Blake Coleman, another Lions Academy product and brother of Lions player Keidean, was the first Queenslander drafted. He went to the Lions at #24 after a bid from Collingwood.

And then at #40  … bang! With their first selection Richmond, the power club of the AFL, premiers in 2017-19-20, selected the Western Magpies big man.

Interviewed by the Toowoomba Chronicle, Ryan said: “It was crazy. Obviously, we were not expecting it to happen last night. Everyone had sort of gone to bed. It was a bit of a whirlwind when it happened – we’re over the moon. I’m very grateful.”

In a pointer to the character of the well-spoken young man, Samson said he was humbled by the selection and took the chance to thank everyone who had supported him.

“It’s an absolute compliment and not just to me, but the people around me who have supported my journey – they’ve all helped me so much to develop my skills.

“It comes with the support you get from your parents, grandparents, mentors and everyone – it’s a bit of a pat on the back for everyone whose input helped get me here,” he said.

In the lead-up to his birthday his parents had asked what he wanted and he’d replied ‘I want a piece of paper to sign for an AFL contract’. This, he said, was the best birthday present ever.

The 96kg giant will forever be the young man once referred to as ‘Ryan Samson’ in an awkward moment from Richmond coach Damien Hardwick with the media earlier in the year. But speaking after Ryan’s selection today there was nothing but praise from the triple premiership coach.

“We thought he was a project player but his ability and drive to learn has been really important,” Hardwick said. His game at VFL level last weekend was very, very good. He’s tough in the contest for a guy of his size, he uses the ball at ground level very well, so we’re really excited about what he’s going to bring.”

Brisbane people, too, will remember his game for the Richmond Reserves against the Lions Reserves at the Gabba last month when he kicked four goals in a sparkling display.

It was also topical when it was worn by West Coast Brownlow Medallist Ben Cousins in his 32-game comeback at Punt Road in 2009-10.

Not only is he Richmond’s only #32 premiership player, having worn it proudly to flags in 1920-21, but he is a five-time AFL premiership coach and also the AFL’s oldest coach at 71.

Then, in 1965 when Melbourne coach Norm Smith was away on representative duties, he came out of retirement for last game aged 71 years 148 days.

An inaugural inductee to the AFL Hall of Fame in 1996, Hughes is also a Hall of Famer with Richmond and Melbourne and is remembered as the man who re-named Melbourne from ‘Fuschias’ to Demons after he sacked 13 players and instilled a new level of discipline in the club.

Happily, spectators will return to the AFL in Melbourne after the Victorian Government eased Covid restrictions. So, the Samson family will be a part of the first crowd at a sporting event in Melbourne since 23 May, capped at 25,000.

Watch Samson call his family with news of his selection – here

Peter Blucher is a consultant with Vivid Sport.