Bond University determined not to let history repeat itself 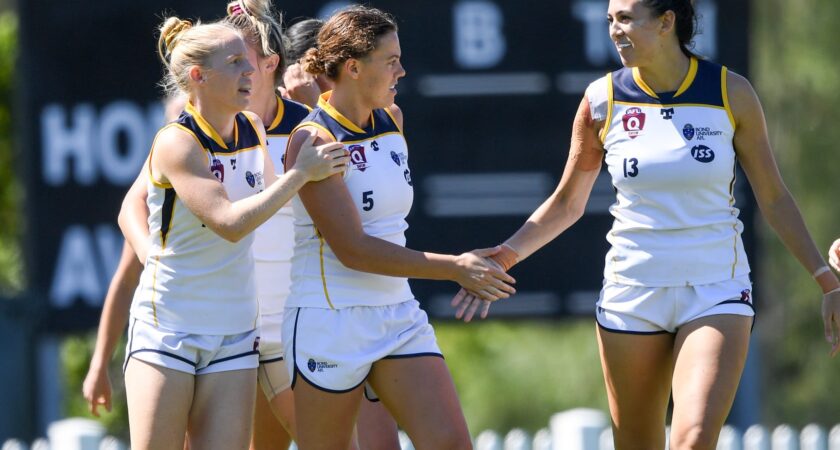 From the first bounce of the 2021 Bond University QAFLW season, the Bond Bullsharks have proven they’re the team to beat – and up until last Saturday they’d produced 13 wins from 13 starts.

But it was at the hands of the University of Queensland that that winning streak came undone, a shock 65-point loss to tighten up the race to the Premiership Flag.

Bond University Head Coach, Luke Mansbridge, admitting the loss to UQ in the last week of the home and away season highlighted the areas his side needs to improve on heading into finals.

“They (UQ) have built their season perfectly and enter finals at full strength and full momentum,” he said.

“The home and away season is finished so now we have to get our focus back to playing hard, tough contested footy which is what wins you finals.

“Finals are not won with the pretty stuff; they’re won with hard work and determination. Whichever side is strongest mentally on the day is going to end up on top.”

After two failed attempts at finals in 2019 and 2020 (against Coorparoo and Yeronga South Brisbane), the Bullsharks are determined not to let history repeat itself.

“It’s exciting to be heading into another finals series, all the girls are pretty pumped,” said Mansbridge

“We’ve sort of been just floating along the last few weeks, having had the top spot on the ladder sewn up.

“The challenge has been around motivation really and to be honest, we haven’t probably been anywhere near the top of our game for a few matches.

“The experience of the last couple of years has hopefully made the girls more determined not to let history repeat itself.

“There is a bit more maturity coming through the group this year, I could already see in training this week that the hunger is definitely back.

“I feel like our culture has been really strong this year, our leadership group has driven that. At the end of the day when you’re halfway through the third quarter and it’s tough, that’s when you need to stand up.”

They’ll look to their leadership group and AFLW players in Watson, Smith, Howarth and Single when they meet UQ this weekend in the first round of finals; with ladder finishes one and two playing off.

Unlike the Bullsharks, UQ haven’t played finals since 2018 and head into this weekend full of confidence.

While the Red Lions, have compiled a very solid season winning ten of their 14 matches, the side is now bolstered by the return of Brisbane Lions AFLW Premiership stars Dakota Davidson, Bre Koenan, Nat Grider and Greta Bodey who dominated on the weekend.

Bodey and Davidson were all over the scoreboard with nine goals between them, while Grider’s pressure down the back and Koenan’s strength in the middle providing the extra support for UQ to get inside 50.

Despite the 65-point win in their pocket, UQ Head Coach, Ross Clayfield said the key to backing up the win this weekend was to not get complacent.

“Bond will obviously come out stronger and I would have assumed they got a bit of a shock. They are top of the ladder for a reason and deserve to be the favourites even after the loss,” he said.

“This season we’ve talked a lot about ball movement, pressure and lateral movement, all that positive football movement and we got to half time, and I said, you know what, I don’t think we have to do things anymore. I think that’s part of our DNA as a footy team now.

“I was really impressed with our defensive pressure; all our players are buying into the game plan.

“Our challenge is to be able to repeat that and maybe, hopefully, find another level in those areas.

“There is a real maturity in the group, I don’t think they’re a group that’s going to get ahead of themselves. They are very focused on creating a bit of UQ history.”

To read a preview of this game, click here: https://www.aflq.com.au/bond-university-qaflw-finals-wk-1-preview-maroochydore-v-coorparoo/