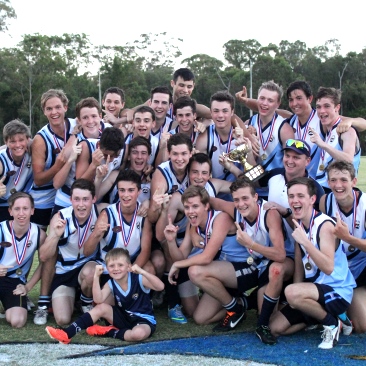 The visitors dominated from the outset, with cleaner possession than their fierce rivals, led by a superb effort from Corey Brodie.

By quarter time, Chris Copley and James Washington had kicked one each for Sheldon, to give their side a 13 point lead at the first break.

It was Sheldon’s defence that stood up as the game went on, cutting off Faith’s movement into the forward line.

Faith’s Tom Michael stood out for the minor premiers, but inefficiency into the forward line let them down.

Copley was a ball magnet for Sheldon in the final, but couldn’t quite convert his opportunities from some tough angles.

In a goalless second term, both sides laid the pressure on thick, with the ball parked in the midfield for most of the term.

Sheldon managed to edge out to a 16-point lead at the major break, putting themselves in the box seat.

A grubber goal from Baden Roberts out of the first clearance saw Sheldon grab the second-half momentum.

Two more Sheldon goals, to Lucas Ryan and Copley, put last year’s runners-up within reach of the trophy, with one term to go.

Faith suffered a major blow early in the final term, with Michael forced off after a head knock.

Matthew Roberts gave them something to celebrate, kicking Faith’s only goal of the match midway through the quarter.

The home side stopped the Sheldon scoring barrage, winning the final term, but they couldn’t peg back the lead.

Sheldon’s Corey Brodie was awarded best on ground for his sensational performance.

Sheldon coach, Jared Plaess, was least surprised when Brodie’s name was called out.

“You had a blinder out there today, Corey,” he said, speaking at the post-match presentation.

Plaess, who has had a long association with a number of his charges, congratulated his side after the game.

“I’ve coaches some of you since under-10s and to get a win in your last game of footy for school, it means a lot,” he said.

“We came out with a game plan and stuck to it.

“Faith has been our best competition all season and it was well-played by them again today.”

Faith coach, Ben Davies, encouraged his players to keep their heads up after the loss.

“You fought hard and worked hard to get to this point and you should be extremely proud of your efforts,” he said.

“We’re building a nice little rivalry here. We got you (Sheldon) last year and now you’ve got one on us.”

Both Sheldon and Faith had lost only match for the season before the grand final.