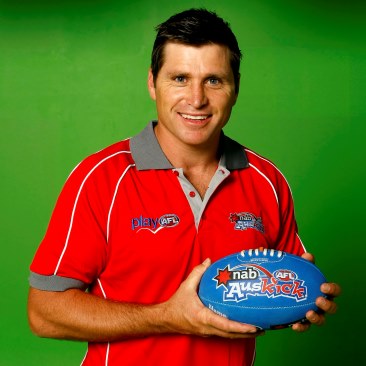 The former Hawthorn AFL Star will meet local Auskickers at a NAB AFL Auskick clinic which will run from 3.45 to 4.45pm at Northshore JAFC,  Mudjimba Multi Sport Complex, Mudjimba Beach Rd, Mudjimba . All are welcome to attend

The Sunshine Coast is one of Queensland’s largest Auskick regions which sees almost 2000 Auskickers each year participating at over 70 Auskick centres throughout the region.

One of the highlights for Sunshine Coast Auskick in 2013 was the selection Finnegan Neighbour as the Round 12 NAB AFL Auskicker of the Year.

Finnegan travelled to Melbourne for AFL Grand Final week where he attended an Auskick dinner, walked in the grand final parade and presented a premiership medallion to a Hawthorn player.

The NAB AFL Auskick program provides boys and girls with a fun and safe Australian Football experience that serves as an introduction to a lifetime of involvement in the game.

The program is not just about introducing children to Australian Football – it activates and develops within each child the desire for a healthy lifestyle and an association with our great game.

This is achieved through activities and programs for individuals, small groups and teams, and aims to assist development of personal and social skills.