Shangare stands up to domestic violence 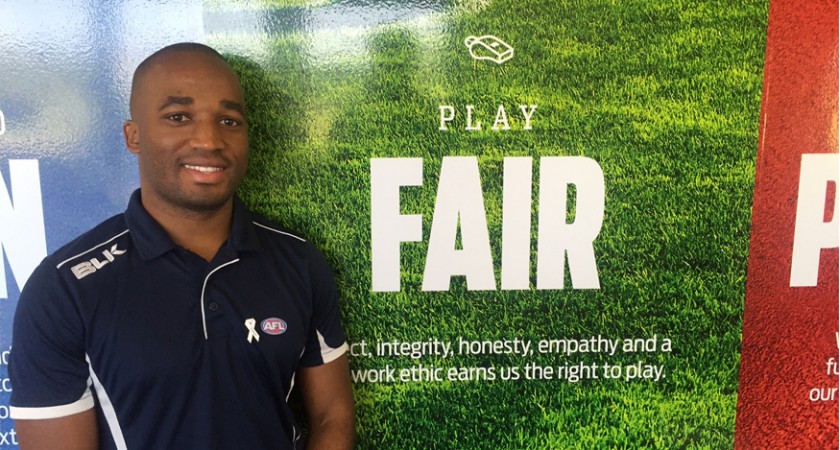 Keith Shangare has taken an oath.

An oath to stand up, speak out, and act to prevent men’s violence against women.

Shangare, who is the AFL Queensland Diversity Coordinator, is a White Ribbon Ambassador. White Ribbon Day takes place on November 25.

Shangare said there is one simple message around to domestic violence that everyone needs to understand.

“Domestic violence affects everyone, it’s something that is happening, and we have got to get the message out there,” he said.

He said it’s about making a stand, speaking out and preventing.

“It’s very important to understand that people have to speak up. As men we have to take the lead with our actions, and women have to also take the lead in speaking up. Tell a friend, tell a work colleague, tell someone, because you are not alone. If someone hits you once, they are likely to do it again, so we have got to break that cycle,” he said.

The White Ribbon Australia Board of Directors first approached Shangare about the ambassadorship 12 months prior to his acceptance.

Before accepting the responsibility of being an ambassador, Shangare wanted to make sure he had a complete grasp on the issue.

“I initially took about a year to think about it because I wanted to make sure that they understood where I came from and what my views are.  One of the things I looked at is what is the impact of domestic violence, and what are the statistics saying,” he said.

“It was also about a counterbalance, because domestic violence happens in heterosexual relationships, same sex relationships, so you have got to understand both sides of the equation.

“Once I had looked at that, I worked out that this is a fantastic organisation that addresses and educates both sides.”

White Ribbon Day, a day about raising awareness and giving support, is next Wednesday.

“The 25th of November was the day unanimously voted by the United Nations as White Ribbon Day, to help spread awareness of domestic violence. People and organisations can host events to highlight the importance of healthy respectful relationships, to give support to individuals facing domestic violence, and to raise awareness that this is an issue in Australia,” Shangare said.

For more information about White Ribbon Day, for help and support, or to take the oath, please click HERE