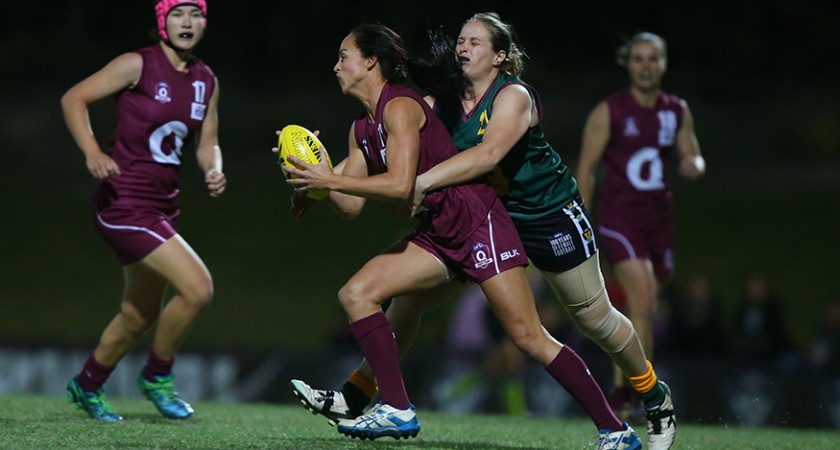 Torn glute, avulsions hip fracture, MCL tear. All that in one year should spell a pretty disastrous year for any player.

Despite the setbacks she faced, Leah Kaslar had a year to remember.

She represented Queensland and the Western Bulldogs, played in the QWAFL grand final with Coolangatta-Tweed, led the QWAFL Best and Fairest count up until the last round, and capped it all off by taking out the Bluebirds Best and Fairest.

Despite the quality of football that she played throughout the year, Kaslar was taken aback by the accolade.

“I started off pretty strong, I just came back from Hawaii, and did a pre-season with a rugby union team over there, so I was pretty fit,” Kaslar said.

“I had quite a few injuries throughout the year, which interrupted my season a bit. I missed four out of the last five games with a hip injury and playing down in Melbourne. I didn’t think that I had gone that well, so was pleasantly surprised during the vote count.”

If you are looking for a gauge on just how well Kaslar played throughout 2015, look no further than the QWAFL Best and Fairest count, where she had polled 20 votes before round 15.

“I was a little surprised that I was out ahead by that much. It was completely unexpected. I think I’d let my injuries take over what I thought about my season in a way, so mentally I hadn’t had a great year,” she said.

“I got knocked off in the last round, but at the time I was just excited to be up there to begin with. It made me feel good to know that my hard work had paid off, and I had been doing well. It was all really positive. You would love to win that Best and Fairest, but I take my hat off to Emma Zielke and Jordan Zanchetta.”

Between uni, work, playing for Colangatta-Tweed, playing for Queensland, and playing for the Western Bulldogs, it’s fair to say Kaslar is pretty busy, but she still manages to give the task she is focusing on 100 per cent of her commitment.

“I’m a good juggler. It is a real challenge, having a full time uni load, work on top of that, and then having the national, state and club games. Once the footy season is on, it takes over my life,” she said.

“A lot of my exam times tend to fall when those exhibition games are. For one I was finishing off an assignment on a plane, so it is a lot of juggling, but once you get to those camps, it’s important to be able to switch off from the rest and just focus on that.”

It’s all those different avenues that allow her continue to advance her game week in, week out.

“All of it has helped immensely. To get to play with the best in the country has been a great help. It’s a faster pace, it’s a higher skill level; I’d like to think that I’m quite fit, but you go and play in those exhibition games and you get tired a lot quicker,” she said.

“It pushes you to perform in that uncomfortable position. There are a lot of people to learn from, and that’s a valuable thing.”

Looking forward, first and foremost, Kaslar hopes there is one element from 2015 that doesn’t show its head again.

“I would love to be injury free,” she said.

“I’d like to be in another grand final. I’d like our team to continue to improve. Hopefully there are some more national games, and we also get a chance to take on some of the bigger states which is exciting.”

The preparation work towards that happening is about to ramp up.

“Personally, I’m starting to do rehab over the next few months, so hopefully the focus is on getting myself strong for the start of the season and to just be really consistent again,” she said.

“I do still want to continually improve my skills and my knowledge of the game. It’s a sport where you can continually get better, and if you get to the point where you can’t, you obviously aren’t trying hard enough.”

If she stays on the park for the whole of 2016, there could be another couple of medals being added to the collection by the end of September.