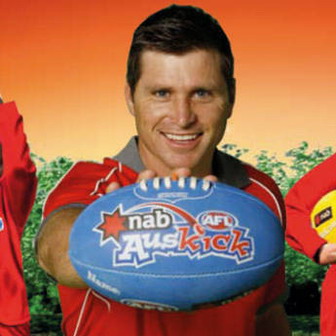 Shane’s appointment was revealed in front of hundreds of Auskickers in Birrarung Marr in Melbourne today.

Shane said he is looking forward being involved in NAB AFL Auskick, not only as National Ambassador, but also as a parent.

“My eldest son Charlie will attend his first Auskick clinic this weekend and it will be my first time volunteering as an Auskick parent. One of the best things about NAB AFL Auskick is that it not only teaches children the game, it also brings families together.

“Auskick is where champions begin and I can’t wait to meet the thousands of young champions throughout Australia. We are now targeting 180,000 Auskick participants so I’m going to be busy,” Shane said.

Dipper said he was thrilled Shane has accepted the role.

“Travelling the country to introduce children to our great game has been one of the highlights of my time in football. I can’t think of a better person to take the reins. Shane is a highly decorated player who has the passion to continue what I think is one of the game’s most important roles,” he said.

Shane is the father of four sons, Charlie (5), Ben (3) and four-month old twins Jack and Harry.

He played 305 games for Hawthorn from 1993 – 2008, his final match was Hawthorn’s premiership victory. The champion midfielder won the 1999 Brownlow Medal, was named an All-Australian four times and won four club best and fairests. He represented Australia three times in the International Rules series and in 2002 was captain. Shane was Hawthorn captain from 1999-2004 and was a Rising Star nominee in 1993.

Dipper will continue a role with the AFL as an AFL Ambassador. He recently returned from the AIS-AFL Academy’s tour of Europe.

“Dipper has done an outstanding job introducing our game to new participants. In his time the number of Auskickers has grown from 111,689 to 167,080 with an estimated one million girls and boys experiencing the program,” he said.

NAB AFL Auskick is the Australian Football League’s key introductory program for boys and girls aged between five – 12 and their families.

The cost of the program can differ from state to state and centre to centre, but the general price range is between $50-$70. Auskickers receive a backpack that includes an Auskick football, cap, drink bottle, pencil set, height chart, activity book and footy cards.