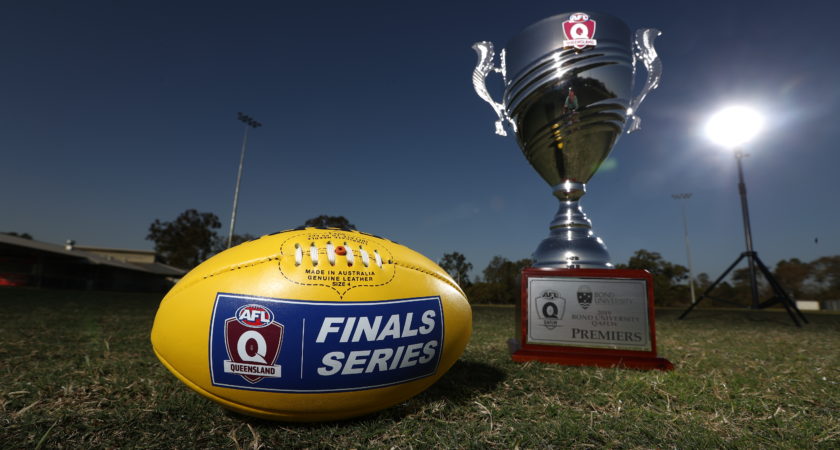 In line with the uniqueness of the 2020 season, a different approach was adopted in determining the host venue for the State’s premier men’s competition, the QAFL. With a top six finals structure featuring two Preliminary Finals in week two, the highest ranked Preliminary Final winner will have the Grand Final played in their region. The two regional venues are Yeronga and Southport.

In fitting with the success of the past two years, an all-women’s Grand Final day will be played at Yeronga on Sunday September 27. The day will see premiers crowned in the Bond University QAFLW / Development League, QFAW Div. 1 and QFAW Div. 2 North and South competitions.

The QFA Div. 2 South premiership cup will be held aloft at Beenleigh’s Dauth Park on Saturday September 19, while the two QFA Friday night competitions will finish their year off at Coorparoo in Div. 3 and Sherwood in Div. 4.

In another unique situation, the highest ranked qualifier in the QFAW Northern Rivers competition will host the Grand Final on Saturday September 19.

AFL Queensland State Manager – Senior Football Operations, Barry Gibson, said in fitting with the events of 2020, this year’s finals scheduling had proven to be uniquely challenging in respect to identifying suitable and available venues to host Grand Finals, as well as getting the right balance of which games are played on what days and in which regions.

“There were a number of obstacles to navigate this year compared to other years, particularly venue availability, which compounded the challenge of scheduling so many Grand Final days in a 10 day period, however its landed reasonably well with games across most regions in the last two weekends of September”, Gibson said.

“It’s fantastic to see Grand Finals being played in the Moreton Bay and Logan regions this year”.

“The QAFL venue decision adds significant value to finishing on top of the ladder, as winning your home preliminary final secures the Grand Final in your region”, Gibson added.

To be played at the venue in the region of the highest ranked Preliminary Final winner.

*In the event Southport is not available due to AFL Quarantine Hub requirements, the game will be played at Yeronga.