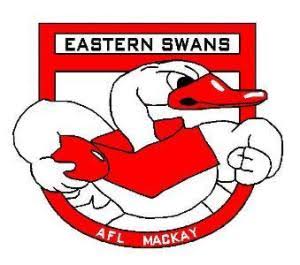 To provide coaching expertise and leadership for the Clubs senior football team which helps to achieve the overall aims and objectives of the Club.

• Develop/revise code of conduct for coaching staff and players that supports the objectives of the Club on and off the field.
• Establish as soon as possible a profile of all current players and a recruitment profile to supplement any perceived deficiencies from 17+ age for senior players
• Contact all current players as soon as practicable after the completion of the previous season to outline plans for the coming season.
• Liaise with the Club Executive to recruit Assistant Coaches & a Reserves Grade Coach &
• Liaise with Club Executive regarding appointment of junior grade coaches.
• Manage the recruitment of players in consultation with the Executive.
• Provide recommendation to the Executive on suitable members of the Match Committee.

Eastern Swans is a family AFL Club located in Central Queensland, Mackay.
East Mackay was established in 1970 following a meeting held at the BP Service Station on Shakespeare Street in February of that year. Our first Club President was John Illingworth; Vice President – Bud Markley; Secretary – John Williams; Treasurer – Lance Barker.
Lance Barker and Des Lally were the inaugural coaches of the newly formed East Mackay and the team name became the red and blue Demons, the same as Melbourne

Eastern Swans has always been and is still very much a family club from our little Under 6s right through to senior footy.

Must have Level 1 Senior Coaching Accreditation.

McDonald’s South East Queensland Juniors have smashed their expected forecast for registrations this season, with a record amount of kids signing up to... [more]