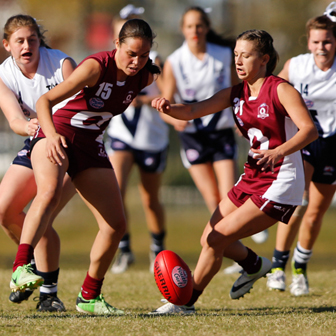 The camp will act as a trial and testing weekend ahead of the National Youth Girls Championships in May.

The weekend will also see the girls play for state team selection in a curtain raiser to the Under 18 boy’s academy game between the Brisbane Lions and the Gold Coast SUNS.

“We are looking to go higher, that’s the aim. But you don’t know what the opposition are going to have, so I think every state is just as excited as we are about what’s ahead for the girls in the national league football,” said Starcevich.

The team will consist of some of the brightest talent from across Queensland, with a number of girls from other sporting backgrounds.

The weekend will play a pivotal role in selecting the final teams, which Starcevich believes to be an exciting step in the development of some of the younger girls moving through the talent program.

“We’ll do some of our selecting from that game, but really it’s been a collaboration of things from what we’ve seen at training and a bit more of a discussion about our elite athletes who haven’t been able to get to training,” he said.

“There are some very talented players that can all kick, they can all run, they’re all athletic, they’re all good above their heads, so it’s scary what that’s going to look like in 2 or 3 year’s time.

“They’re just impressive, really, really athletic. They love to tuck the ball under their arm and take off and run, these are some of the things that we try to, and these are the things we’re asking the regional people to look out for and identify and I reckon that group is starting to come through, which is really exciting, with kicking skills really improving despite the fact we get a lot of girls from other sports”.

The 2015 Youth Girls National Championships will be contested in Mandurah, Western Australia.

The competition, beginning in the first week of May from the 3rd to the 8th, will highlight some of the most exciting talent in youth girl’s football across the country.