Scorpions to tackle Tassie in U18 Champs 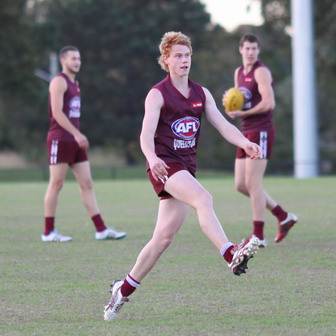 The Queensland Scorpions will meet fellow Division 2 rivals and reigning champions Tasmania in Round 3 of the NAB AFL Under 18 National Championships at Yeronga on Saturday.

The match will be the first Under 18’s Championship game to be played at Leyshon Park, home of AFL Queensland’s Administration and Training Centre.

Tasmania are hunting a third consecutive Division 2 title and will be keen to notch up their first win in this year’s competition after losing to Division 1 teams South Australia and Vic Metro.

The Scorpions started the Championships in blistering form, narrowly beating powerhouse WA  before coming back down to earth with a 94 point loss to Vic Country.

With Round 1 and 2 cross-divisional matches not counting for points or percentage, early form will be forgotten when both teams take the field.  The Division 2 title will be fought over three rounds starting with this weekend’s match.

The conclusion to this year’s titles will be staged at Etihad Stadium (Division One) in Melbourne on Wednesday, July 4 — which will be broadcast nationally on Fox Footy — and at Simonds Stadium, Geelong (Division Two) on Thursday, July 5.