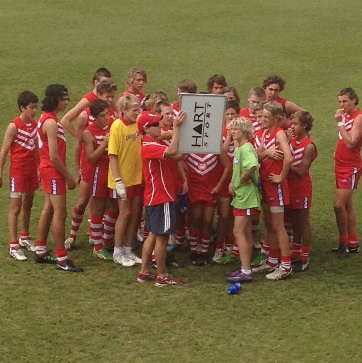 In a big day for the ‘Reds’,  they not only won their AFL Northern States Cup qualifier, to go on and represent Queensland next month, but also took on co-ladder leaders Narangba Valley State High School in the Schools of Excellence Cup Junior Grand Final and won.

At 10:00am the state’s best under 14 school teams gathered to contest the qualifying round for the annual Northern States Cup, a competition showcasing the best under 14 talent across New South Wales, Queensland and the Northern Territory.

Brisbane Lions Cup winners Villanova College from Coorparoo took on Narangba Valley SHS ‘Vipers’ in a very close game, both sides showing plenty of fight but Villanova were too strong in the end and ran out winners 8.14.62 to 4.2.26.

On the other field, it was a battle of the Gold Coast with Palm Beach-Currumbin taking on Gold Coast SUNS Cup winners Keebra Park State High School.

The boys from Keebra showed a lot of raw skill and talent, and certainly matched the Reds for size, but it was a very classy Palm Beach outfit that made the most of their time in their forward 50 and won 11.5.71 to 3.11.29.

Villanova College and Palm Beach-Currumbin SHS will now represent Queensland on 21st – 23rd September against NSW and NT here at Yeronga as our best under 14 school teams.

In the second game, Narangba Valley and Palm Beach-Currumbin backed up and played their grand final for the Schools of Excellence Junior Division (also under 14).

In stunning 24 degree Queensland winter sunshine, the boys were tired but still put on a great game with the scoreboard at the end not doing the teams justice.

Both the Vipers and Reds fought hard and brought a lot of skill to the game, but it was the Reds who continually got the centre clearance, had a defensive backline like a brick wall and were accurate in front of goal.

Coach Peter Hill was pleased with the boys’ efforts and praised both teams for their seasons.

“Both teams were undefeated this season so we had kept an eye on the Vipers progress over the course of the year and it was only fitting the two best teams played the grand final” Hill said.

This is Palm Beach-Currumbin’s third Junior Excellence title in a row.