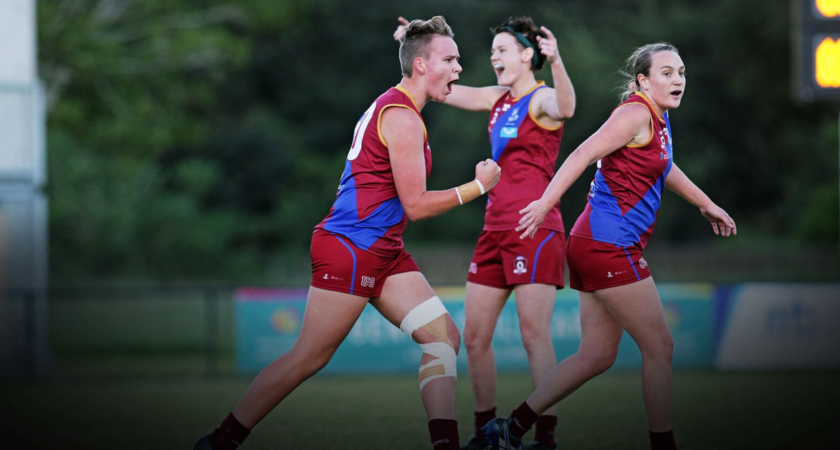 Bond University has raced to the top of the QAFLW standings with a commanding 31-point win over Maroochydore at Ormeau Sports Park, solidifying the Bullsharks as a genuine premiership contender.

The Bullsharks continued their dominant start to the season to claim their fourth win in a row against the Roos who entered the contest in solid form themselves.

Tiarna Ernst, who was again among the home side’s bests in her second game for the club, paved the way for the Bullsharks’ 5.1 (41) to 1.4 (10) win with a superb lockdown role on Roos spearhead Shannon Campbell.

Campbell looked dangerous early as the Roos won the first clearances of the second term but her running shot from 40m out couldn’t roll in for a score as the Bullsharks defence mopped up.

Shortly after, she roved a pack deep inside the Roos’ forward 50 to snap truly and edge the Sunshine Coast team in front.

From that point on though, scoring would heavily favour the home side Bullsharks who responded in the 18th minute though Lucinda Pullar who converted her set shot following a strong contested mark.

The low-scoring affair – just the three goals booted in the opening half – was quickly changed as Bond University ramped up the scoreboard pressure with three majors in the third – almost doubling the combined halftime score.

Erin Sundstrom was the first to hit the scoreboard to extend the lead before Amanda Berry and Kaitlyn Reynolds, who worked tirelessly in the ruck, extended the lead – the latter slotting her opportunity after the siren to ensure a Roos comeback would be rather unlikely.

Reynolds, along with the Bullsharks’ midfield group consisting of Shannon Danckert, Georgia Brehmer and Laura Attard all shone in the win.

For the Roos, Campbell, who was thrust further up the ground in the second half, was a solid contributor for the Roos alongside Georgia Doherty and midfielder Kate Surman.

Bond University will look to claim their fifth straight win of the season in Round 6 when they face Coolangatta Tweed in a Gold Coast derby while Maroochydore will again be on the road as they face Yeronga on the Sunshine Coast.

University of Queensland continues to earn a reputation as the QAFLW’s enigma with a resounding 101-point rout of Aspley at Southpine Sports Complex.

The Red Lions shrugged of their previous round loss to Bond University to produce their biggest win of the season, winning 14.17 (101) to 0.0 (0) over the Hornets in Brisbane’s north.

The home side’s final score was the highest so far this season – a figure even more perplexing given the Red Lions’ 1-3 record heading into the contest.

Simply, with the plethora of experience at hand, the Red Lions went about their usual trade while Aspley, already missing a handful of their most talented youngsters, struggled against the bigger bodies of UQ.

Megan Hunt, who had already booted six goals in her side’s only other win of the season against Yeronga, was again key in her half-forward role.

She finished with four majors to sit atop the QAFLW goal kicking standings after the opening five rounds of the season while another two Red Lions also kicked multiple.

Dakota Davidson, who just may be the most versatile player in the competition, again showed her worth to the Red Lions as both her and Greta Body, who was playing her first game in the QAFLW, kicked three in the win.

Their scoring slowed slightly in the second with just one major prior to halftime before they went on an even greater run in the third to cap off a fantastic night.

The Red Lions dominated in the third to score 5.7 – a figure that would have alone beaten three other teams and would have come close to beating a further two. In the final term, they added another five to storm home.

Next week, University of Queensland will look to claim their first back to back wins of the season against Wilston Grange while Aspley will host Coorparoo.

A storming opening term from Wilston Grange has helped ignite the Gorillas season with a thumping 33-point humbling of Coolangatta Tweed.

The tale of the tape before the contest at Eximm Oval would have easily pencilled in a Bluebirds win – after all, the Bluebirds were playing some of the competition’s best football while the Gorillas had lost consecutive games to Yeronga, Bond University and Maroochydore.

The foundations for the Gorillas’ win was forged in the first quarter as the away side booted four goals to one in a barnstorming opening 20 minutes including an intuitive snap from Kristen Tyquin who kicked the game’s first inside two minutes.

The tone was set early and it didn’t take long for it to be known the Gorillas were all business.

Sarah Fuller booted the Gorillas’ second of the term with a long range kick that was enough to roll through and extend their lead.

An even second term paved way for the Bluebirds to win some footing back in the contest but inaccuracy couldn’t lift them back into the fray.

Coolangatta had opportune chances to win back and extend their run atop the QAFLW standings, but the home side mustered just 2.3 compared to the Gorillas’ two straight majors.

With the writing of an upset brewing as the two sides parted for the main break , a tense third term ensued with neither side troubling the scorers too often.

Kate Lutkins was deployed as a high, moving forward and her influence on the contest was near paramount to onlookers.

When Fuller weaved through congestion inside the Gorilla’s forward 50 to boot her second of the game midway through the third, Grange’s lead was extended once again and hope for a Bluebirds comeback was all but lost.

Catherine Svarc continues to serve the Gorillas well and one was one of their best in the breakthrough win while Lutkins, Fuller and Emm MacNeill were also a step above.

For the Bluebirds, Jordan Membrey and Maddy Roberts worked tirelessly in the midfield.

In temperatures that neared ten degrees, a number of players opted to don the long sleeves but even that couldn’t aid both side’s slow start to the contest.

For much of the opening term, both the Kings and Devils found themselves with ample amount of possession but simply couldn’t’ craft many scoring opportunities inside 50.

Both sides nailed home one major in the opening term as the Devils carried a two-point buffer into the first break.

It was in the second though, when the Devils’ midfield really came to the fray and helped establish the away side’s dominance around the ground.

Jacqui Yorston and Jordan Zanchetta were the extractors in the midfield while Emily Bates and Sarah Duncan on a wing were also pivotal on the outside for the Devils.

The midfield produced repeat clearances for the Devils in both the second and third terms which resulted in countless inside 50s for the side.

Their dominance however couldn’t be capitalised upon with a string of five behinds in the second keeping the game within the Kings’ reach before Molly Suter finally broke the drought before half time.

In a similar tune to the second term, the relentlessness of the Devils’ midfield continued to push them but their forward line simply couldn’t capitalise as the Coorparoo defence held steady under increasing pressure.

Again, the Devils would kick just one major for the term, this time via Jade Ransfield, to extend their lead before Gabby Collingwood and Tayha Hutchinson sealed the victory in the final term.

Yeronga midfielders Bates and Duncan were named among the best while Collingwood continues to perform in her new colours this season while for the kings Jesse Tawhiao-Wardlaw was a consistent threat both inside 50 and up the ground.

The Lions AFL forward finished with both of the Kings’ two majors and took countless contested marks in transition.

Yeronga will face Maroochydore on the road in Round 6 while Coorparoo will hope to avenge their opening round loss to Aspley next week.

Panthers dine out on Mother’s Day meal of Hawk
Burge moves into the lead : Syd Guildford Trophy Round 6