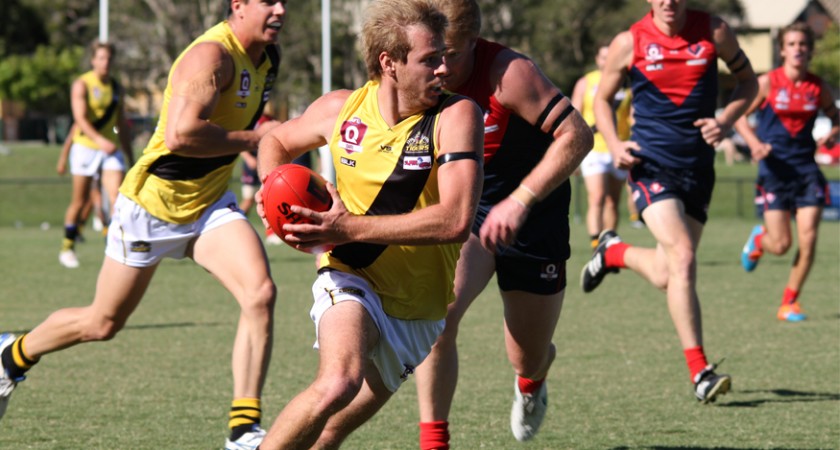 After a blinder in the middle against UQ on Saturday, Labrador’s Adam Clarke is the Round 17 Syd Guildford nominee.

They have had a few good nominees this year, but I think Clarke might just be the best yet. He’s a jet.

After missing the week before through a bit of soreness, his impact was immediately felt on his return Saturday afternoon. The run, the carry and the pace on the outside that they missed a bit the week before was back.

“It was good to get back on the winners list. I was just a little bit sore the week before, so hopefully that week off helps me heading into finals,” Clarke said.

Clarke was on fire in the middle, especially in the second half, and even snuck forward for a couple of goals, but it wasn’t all one-way running.

“They were a tough team. They hung around all day and were really tough to shake. I think we were playing pretty poor and they were playing really well,” he said.

“SJ (Steve Daniel) gave us a bit of a rev up at half time, and as a group we thought we need to pull our heads in a play the footy we want to play.”

What the win did, was lock up top spot on the ladder, meaning Clarke gets another opportunity to rest up after this weekends game.

“I’m not used to finishing on top, so it a nice thing to achieve at the end of the year after all the hard work that we have put in. It’ll be nice to have to week off, and rest up,” he said.

Getting yourself right to go, week in week out, is a difficult thing to do this days. Clarke clearly didn’t get the memo.

He has played 16 of a possible 17 games this year, and represented Queensland in the State Representative Carnival.

He puts his ability to consistently be on the park down to being smart about managing the bumps and bruises he gets, with the help of the Labrador fitness staff.

“I just take it week by week. As I’m getting older, my body isn’t holding up as it would have when I was 18, and working as a plumber doesn’t really help either, so I just try and manage my body and listen to what it’s saying to me. It’s been good this year, and the physio staff at Labrador have kept me on the track,” he said.

With just one more home and away game to go, it’s almost time to get down to business in the finals series.

“I think we are looking good, but I don’t want to look ahead to far just yet though. It would be a shame, after finishing on top, to not keep that form up through finals,” Clarke said.

“It’s going to be tough in September, it’s a different ball game, but we have got to play our style of footy, and hopefully the rest takes care of itself.”

One things for certain though, Clarke is up and about.

“I’m excited. I haven’t really played finals in a while, so to get that finals feeling, it’ll be good. It’s something I’m definitely looking forward to,” he said.

Labrador take on Mt Gravatt at home this Saturday, before their first final on the weekend of September 12/13.

Grab Your Friends and Get Active
AFLQ Volunteers of the Week: The Floyd's