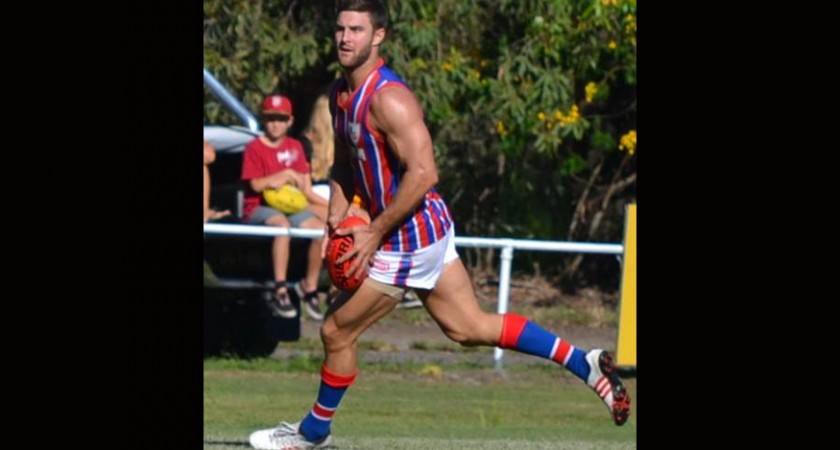 Steve Brittain was sublime in the Wilston Grange midfield on Saturday, and because of it, is the round 16 Syd Guildford nominee.

It has been a bit of a frustrating year for Brittain due to injury, but a best on ground performance, in your teams’ best win of the year, two weeks out from finals should make up for that.

It was physical, it was brutal, it was high-pressure football against Labrador on Saturday, and Brittain thrived in all parts of the ground.

“Firstly, I wanted to work hard defensively early because they had a lot of fire power up forward, so I wanted to help our defense out as much as I could,” Brittain said.

“Our midfield, including myself, haven’t been scoring enough either and there was too much pressure on our forward line to produce a winning score. It was important that once we had control of the footy that we pushed hard forward to kick some goals, which we were able to do.”

Brittain said the win itself, which keeps their top three dreams alive, was very fulfilling.

“It’s always such a rewarding victory when everyone plays their role in the team and you come away with the win,” he said.

He didn’t have it all his own way on Saturday though. After half time, he copped a hard tag from Liam Burke, who followed him everywhere he went, including the bench.

“Unfortunately the tag is something you have to deal with from time to time. I just tried to not let it change the way I had played in the first half,” he said.

Brittain’s hasn’t been able to get a clean run at it this year, succumbing to niggling injuries at various parts of the season, but he hopes they are behind him.

“It’s been a very frustrating year personally for myself with injuries. It’s still a week-to-week thing, but the weekend was the best I’ve felt in weeks so hopefully it stays that way,” he said.

“He’s our captain, he is a super player and teams worry about him when he plays. Not only does he bring something for us, but he will have an affect on the competition as well,” Trewhella said.

Watching Brittain and Labrador’s Ryan Davey go head to head in the first half was one of his highlights.

“I thought that even though Davey played well, seeing those two go head to head was exciting and good for the crowd to see as well; two quality midfielders going head to head,” he said.

He wasn’t too bothered when the tag went to him either.

“It’s really difficult to tag Steve. It would have to be a special type of player or someone who had a terrific game. He is 6.2ft, 95kgs and ball of muscle, who is powerful, skillful and quick with his hands,” Trewhella said.

“It would be a nightmare trying to tag someone like him.”

There is an aura of confidence down at PBI Oval at the moment, and for good reason, but Brittain said eradicating the bad games will be key to them reaching their potential this year.

“The coaches and I have always had a lot of belief in our group. It’s been our consistency that has let us down. If we can continue playing the same brand of footy as we did on the weekend, we will be big contenders,” Brittain said.

Wilston Grange travels to Dittmer Park this Saturday to take on Mt Gravatt.

Behind the scenes: Queensland U18 nationals
Inclusion Team do us proud at National Champs