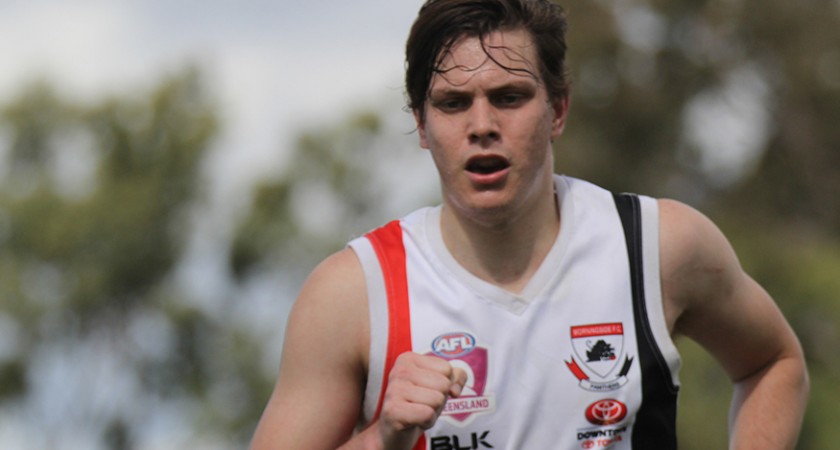 Standing at 198cm, Mollison was able to give his midfielders first use of the footy on the weekend leading to a 123-point victory which snapped a three game losing streak.

“I’m actually quite surprised I got the nomination to be honest because I thought it was a pretty even battle in the ruck there with Nate Dennis from UQ,” Mollison admitted.

“He’s quite a good player and I’d say definitely one to watch. I thought we were quite even in terms of the ruck battles.

“I’ve been trying to work on my around the ground stuff because that’s where I can get the upper hand in the middle there.”

Mollison says he is humbled by the nomination for the prestigious award and is excited just to have his name in the conversation.

“I know there’s some past winners from Morningside who have been incredible players so to just be nominated is quite an honour.”

Saturday’s win has breathed new life into Morningside’s bid to play finals footy according to Mollison.

“We absolutely needed it,” he admitted.

“It was good to get our midfield clicking and especially on the road to finals get everything working as we try to launch our campaign.

“I think we’ve recognised that every game from here is our mini finals which is where Morningside actually quite enjoys it because we know that’s where we want to be.”

Mollison was born in Sydney, but grew up in Melbourne and played his junior footy for the Camberwell Sharks.

He started playing for Morningside when he was 10 after he moved to Brisbane in 2001.

The loyal Panther played his first match of senior footy in 2011 and says the 2014 premiership win has been the highlight for him so far.

“Being able to finish off a pretty incredible season where we went through undefeated was amazing and some of the personnel that we had, I grew up watching them from the sidelines when I was a junior so to play with them was fantastic,” he said.

Morningside have a huge few games ahead, most notably this weekend against Mt Gravatt, but Mollison says they are no strangers to making a late finals charge.

They were in a similar scenario this time last year with their backs against the wall, but managed to launch a finals campaign which saw them fall just short in the grand final.

“I think going into that grand final as the underdogs was always motivating to think that we’d been knocked off our perch and in typical Morningside fashion we stuck true to ourselves and came within a kick and a half of that premiership.

“It definitely hurt but we’ve had our successes and we know that with the good also comes the bad and vice-versa so for this year while it wasn’t the main motivation it has always stuck in the back of our minds.”

Mollison says he is confident the Panthers can go all the way this season, but it starts with putting together four consecutive quarters of quality football.

“If we can put four together I think not only will we win this week but we’re going to be very difficult for the rest of the season,” he warned.

“I think our top level is the best in the league it’s just that we’ve had patches of five or 10 minutes where we’ve just taken our foot off the throat and let other teams get into the game.

“In terms of the game plan and how we go about things, we don’t change from here.”