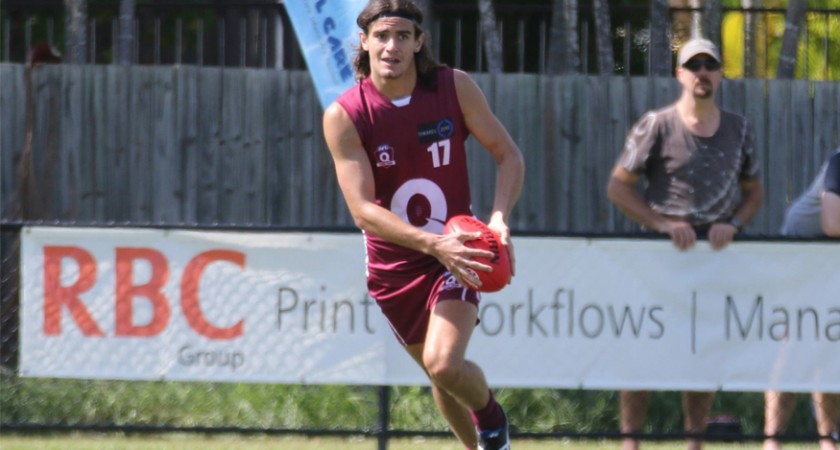 Despite suffering an ACL injury in the final quarter of the match, Wilston Grange forward Joel Perry-Warren has earnt the Rising Star nomination for round 15.

The 18 year-old kicked a bag of five goals and was playing as a versatile forward before he came down with the potentially season-ending injury in the fourth quarter of Wilston Grange’s win over Sandgate.

“I thought I was marking really well, I had a few set shots on goal which I missed but thought I put through the ones which counted,” Perry-Warren said.

“I do like to work on my marking, I like to be able to jump in the air and take big marks.

“That’s my role. We have a few small forwards and I’m one of them but try to make myself a tall sometimes when I need to.”

Perry-Warren was integral in helping Wilston Grange to their first win in 77 days.

“It was awesome, it was great to get a win and finally get our hard work recognised,” he said.

“We’ve had lots of injuries recently so it was good to get the win.

“I think the team will take it as a very good sign, we’ll keep moving forward with this and hopefully get a few wins towards the end of the season.”

Born in Bundaberg, Perry-Warren spent most of his life living in Gympie where he played his junior footy.

“My step-dad was a big AFL fan and he got me into Auskick when I was about seven or eight and I’ve just loved it since then,” he admitted.

“I played a bit of rugby, cricket and golf as well… but it was always AFL for me.”

Perry-Warren was 16 when he moved to Brisbane to compete in the Under 16 championships for Sunshine Coast.

He then moved back up to Bundaberg for a year to play senior footy with Brothers Bulldogs before coming back down to play for Wilston Grange again in 2016.

Not one to shy away from a challenge, the small forward relished the opportunity to play at a higher level.

“I’ve been playing senior footy since I was 14 so I’ve always loved the bigger bodies and harder opponents,” he said.

His determination and hard work was rewarded when he earned his spot in the Queensland Under 18 team earlier this year.

“It was great to be able to play against the best of the crop footballers in Australia so it was an awesome experience.

“It’s a lot better skill level at Queensland obviously but I love playing seniors and playing against men; I like the bigger bodies and the contact.”

Perry-Warren says playing in the forward line is a relatively new experience for him, but he is enjoying playing his role for the team.

“I was always a midfielder but since I’ve had my year off I’ve been playing up forward to try to get my fitness up so hopefully I can be a rotating midfield/forward type player,” he said.

“My fitness and my skills below my knees (is something I need to work on).”

His more pressing concern at the moment is overcoming the injury to his ACL and getting back on the park as soon as possible.

“I’m going to try and recover well and do my rehab properly then hopefully go bigger and better next year,” he said.

Perry-Warren will have scans later this afternoon to determine the extent of his ACL injury.