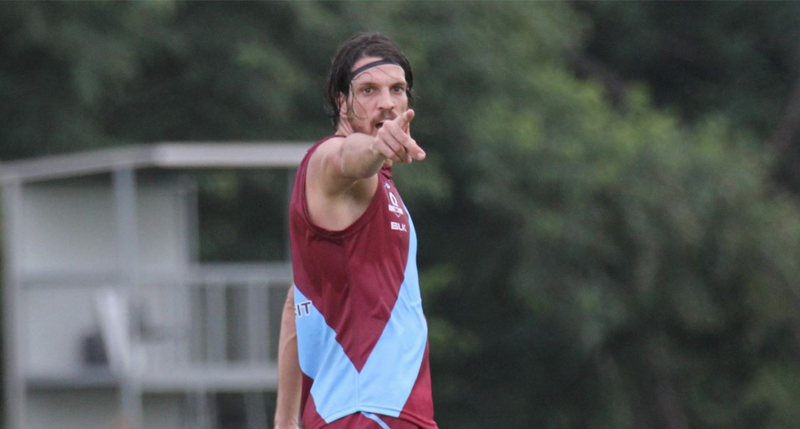 We usually speak to him about the team as a whole, but this one is about him. After three goals and a heap of the footy in UQ’s win on Sunday, Darren Pfeiffer is the round 14 Syd Guildford nominee.

The Red Lions chalked up win number two in 2015 over Sandgate, thanks to the contribution of Pfeiffer and a few of their young guns.

“I thought I started pretty well. It was good to kick a few goals; I’ve been enjoying playing forward a little bit more. George Hannaford and I have been swapping down there, which I think has helped us a little bit,” Pfeiffer said.

“As the game went on I found myself just taking care of the defensive side of the stoppages, which was for the team more than anything.”

Splitting his time on the ball and forward has been a move we have seen a lot more in the last few weeks, and it’s paying dividends. UQ are kicking much bigger scores.

“We were getting a few inside 50s through the first eight weeks but we just weren’t quite as efficient. We just wanted to chuck a couple of more people down there, like George and myself, blokes who can maybe take a contested grab and maybe kick a few goals more often, so that’s definitely been a focus, to hit the scoreboard early in the game,” he said.

In his first year in the job, balancing his coaching commitments and worrying about winning his own footy has been challenging, but his on field form of late shows that it’s all coming together.

“The first month or so was a little bit of a transition thing in terms of the coaching and playing. I probably tried to run it all myself a little bit at the start, so now I’ve given a bit more responsibility to the coaches on the sideline, and just try to take myself away from a few of the little things on game day which has really helped,” he said.

“At the start I really wanted to nail down a few things, so I probably took a little bit too much on board.”

The most rewarding part of 2015 has been watching the kids around him grow, and play some seriously good footy.

“That’s the one reason why I wanted to coach as well. The year before I really enjoyed chatting to the younger players at Redland so I thought this year I would have a more active role in teaching the kids,” Pfeiffer said.

“Seeing kids like Harry Milford and Luca Mason play relly well, and even Mark Mccutchan and Phil Shaw, two blokes that have just come in recently, showing them that they can play QAFL footy, I get a bit of a kick out of it.”

Finals are clearly out of the picture, so the last month for Pfeiffer is about continuing his good form, and banking a couple more wins to roll into pre-season with.

“Definitely over the next few weeks we are just looking to play some good footy, and every win from now is that little bit reason to come out to pre-season training, that’s why I want us to have a couple more, to get a few more numbers on the track for next year,” he said.

UQ travel to PBI Oval this Sunday to take on Wilston Grange.

Volunteer of the Week: Sam Haddad
Registrations open for THE RECRUIT season two